Future of Feminism: Telling Our Stories Out Loud - Ms. Magazine
Skip to content 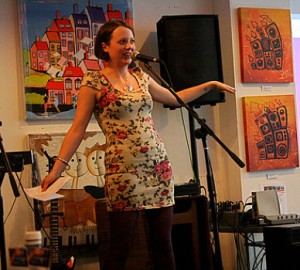 So often, the purely academic approach to feminism isn’t enough; you need to connect with people through personal anecdotes, humor and everyday experiences in order to break through and help people realize why feminism is vital. The women that follow do this with great aplomb through spoken word, slam poetry and other forms of performative storytelling.

So, humor and intimacy are one way into discussions people think they’d rather not have. Through storytelling, I can help people reflect on our lives within a social context.

Dark gets to the root of privilege and social oppression by telling incisive personal stories and trying to “model cultural creation” for her audience. “People contact me later to say that they’ve begun to see everyday life differently since seeing a show or hearing a particular story in which I deconstruct a daily interaction,” Dark says. “They now do the same–see more critically, ask more questions.”

While Dark considers herself more of a storyteller or “artistic activist” than a slam poet, she insists on the importance of the slam scene as an “open-access platform” that “can be a form of activism.” The women of Salt Lines Spoken Word Collective exemplify this activism: Andrea Gibson, Tara Hardy, Denise Jolly and Sonya Renee Taylor, all well-known and award-winning performers in their own right, decided to start touring together after a fortuitous conversation at the 2008 Women of the World Poetry Slam competition in Detroit. Says Jolly,

The mission is to challenge that which oppresses us … We believe in the power of oration as a way of healing and creating permission for others to liberate their stories.

The women of Salt Lines’ performances range from poignant to hilarious to uplifting, addressing such issues as body image, same-sex marriage, addiction and queer visibility politics. The personal stories they share have an intense intimacy, but shed light on larger social issues and cultural oppressions. Adds Taylor,

You can find more great videos and audio recordings on most of the Salt Lines members’ websites (linked above) or on YouTube. Stay tuned for an upcoming podcast on the Ms. Blog featuring the women of Salt Lines.

Want to give a shout out to other feminist slam poets or spoken world performers? Link them in the comments!

Part Twenty-six in a Women’s History Month series celebrating organizations and ideas that represent the future of feminism.

Photo of Annalise Mackintosh performing as part of spoken word collective Words Per Minute  from Flickr user The Arches via Creative Commons 3.0