March Madness Made Me Question My Feminist Credentials - Ms. Magazine
Skip to content 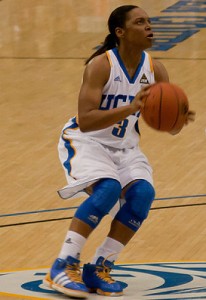 While the Syracuse University men’s basketball team finished their run in the 2012 NCAA March Madness tournament against Ohio State, I watched with a heavy hoops fan’s heart at a bar on campus with hundreds of other Orange fans. As a feminist, though, my enthusiastic support for my school’s basketball team feels problematic at times.

I cheer and cry for the same program that is currently associated with the allegations against former assistant coach Bernie Fine for molesting multiple ball boys. And in June 2011 Fab Melo, SU’s starting center (who was ruled ineligible for the 2012 NCAA tournament), was arraigned in Syracuse City Court for being involved in a domestic dispute with his former girlfriend. According to the police report, Melo was physically violent with his girlfriend four or five times since they began dating, and she claimed they had a “volatile relationship.”

In 2007, a female student accused three Syracuse basketball players—Rick Jackson, Jonny Flynn and Scoop Jardine (a graduating starter in the 2012 season)—of sexual assault. The charges were eventually dropped, but the players were found responsible for behavior “that threatened the mental health” of the woman.

These incidents make me confront this question: Can I effectively engage as a feminist fan of Syracuse’s men’s basketball program? Why not switch my allegiance to women’s college basketball?

If I went to the University of Connecticut, it wouldn’t be an issue. The UConn Huskies, Syracuse’s basketball rival, draw great interest for both men’s and women’s teams. Head coach Geno Auriemma has led the women’s team to seven national championships, 12 Final Four appearances, and more than 30 Big East Conference Championships. The team also holds the longest winning streak in NCAA college basketball history, men’s or women’s, at 90 consecutive games.

But not all college women’s basketball programs are so successful and so highly regarded and respected on campus. And the fact is, except at certain schools with elevated women’s programs, we live in a culture that prioritizes men’s sports in the mainstream media and on campuses–especially when it comes to basketball in March.

It’s not always easy to become a fan of women’s collegiate basketball: Schools don’t always spend the same amount of money and marketing efforts to promote women’s sports; it’s more difficult to find games broadcast on television (let alone at a campus bar); and President Obama was the only person I saw fill out a bracket for the women’s tournament this March. Feminist website Jezebel, rather than hyping the women’s game, makes light of March Madness by creating a tournament battle between random pleasures: This year it was sex vs. chocolate.

But as a student, it’s difficult to break away from the dominant narrative of men’s basketball fandom. When the entire student body rallies together behind one team, it can feel alienating to not join such a significant part of campus culture.

So how does one navigate the ambivalence of identifying as a feminist but enjoying men’s college basketball when players or coaches are bad actors who assault women or children?

Popular culture smacks us in the face from the moment we wake up in the morning, so it’s critical to think about what we choose to participate in and how. Bringing a critical, feminist lens to problematic experiences helps us learn the ways in which patriarchy operates on a systemic and individual level.

The great feminist theorist bell hooks has written, “A phrase like ‘I advocate’ does not imply the kind of absolutism of ‘I am.'” I take that to mean that I can resolve my feminism and my love of the men’s college game by not forgetting the advocacy part of feminism.

After recognizing the faults of men’s college basketball programs and problematic ways in which they are represented in our society at large, the next step is to move toward advocating for gender equality in sports through collective action. After a disappointing loss last Saturday night, SU’s campus acted as if basketball season was over entirely and the only hope was to wait for next year’s men’s team to make another run for a national title. Meanwhile, the women’s basketball team won four straight games on the road and made it to the WNIT semifinals before barely losing [PDF] to James Madison University. My feminist sisters, were you watching?

Student athletes, especially on men’s basketball teams, can use their celebrity status on campus and in local media venues to encourage students toward a women’s sports fandom. Indeed, there was Heisman Trophy winner Robert Griffin, Jr. front and center at the Baylor-Stanford game in the NCAA Women’s Final Four last night–kudos! He’s a model of how male players–as some often do–can turn their attention to women’s teams with a Tweet, Facebook status update or, best yet, appearing at a game. School administrations should also demonstrate their efforts toward prioritizing women’s college sports with well-funded and supported marketing campaigns.

Since this issue extends way beyond Syracuse’s campus, other famous basketball fans should rally behind women’s college basketball in the same way that Bill Clinton and Spike Lee sat behind Syracuse’s men’s bench in the Big East tournament. Famous women, too, should adopt a college team and support it! If students see people in the spotlight prioritizing women’s games, then more fans might operate under the assumption that women’s college basketball is something worth paying attention to.

I will always “bleed orange,” as the saying goes at Syracuse, but I won’t stop bringing a critical lens to my fandom. My internal struggle over problematic components of men’s college basketball has driven me to embody responsible attitudes about culture consumption.

But I can say, without ambivalence, that you should watch the NCAA men’s basketball championship tonight (Kentucky vs. Kansas) and don’t miss Tuesday night’s women’s championship matchup between unbeaten Baylor, with player of the year Brittney Griner, and feisty Notre Dame, with point guard of the year Skylar Diggins. Play ball!

Krystie Lee Yandoli is an English and Women's and Gender Studies double major at Syracuse University where she writes a weekly column on gender issues for The Daily Orange. Krystie also blogs for The Huffington Post and her writing has appeared in Women’s eNews, AlterNet.org, TheFrisky.com, The Nation online, Time Out New York magazine online, and The New York Post. She can be reached by email at [email protected]