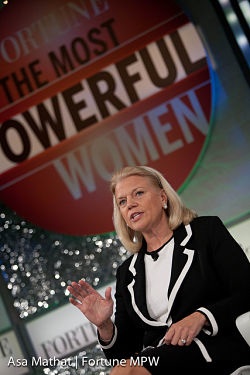 Today’s tee-off at the Masters Golf Tournament in Augusta, Georgia came and went without a single woman arriving at Augusta National Golf Club in the icky green jacket that denotes membership. The club never announces new members; members announce themselves by showing up at the tournament in the aforementioned green.

Not having a woman in Augusta National is not news. The club has always been men-only, and it resisted extreme pressure 9 years ago from women’s groups to accept female members. What is news this year is that the lead sponsor of the golf tournament, IBM, has a new CEO–and her name is Virginia. IBM CEOs have always been given memberships. Until now.

In the run-up to the tournament there was much press speculation as to whether the club would at last dump their dinosaur image and admit Rometty. And if not, what would IBM do? We found out on Thursday. IBM did nothing, and in doing nothing swallowed its company integrity and hung Rometty out to dry. The silence sent a loud and clear message: “We respect the boys at Augusta National Golf Club more than we respect our woman CEO.”

Close your eyes and imagine a little different scenario. IBM has a new CEO. He is African American. IBM CEOs have always been members of Augusta National. The club has never had an African American (as was true until 1990). Does one of the world’s most successful corporations continue to pour money into Augusta National and underwrite racism? Of course not.

But this time it’s different–it’s only a girl. And girls don’t count. They may be OK to put out front to show the world IBM is a progressive company, but they don’t really have any authority, and they don’t really deserve the same respect as former CEOs.

Why didn’t Rometty object? Maybe she decided years ago not to make waves. Maybe she just doesn’t understand the symbolism of the tacky green jacket–which is not about golf, but about power. More likely she did object–and was bellowed down by the bullies on her board of directors (the chair of which, Samuel Palmisano, is an Augusta member). You know the line: “Wait a little longer, little lady.”

Hooray for the women’s movement for passing the laws that opened executive suites by making employment discrimination illegal, allowing Rometty and a very few sisters to get to the top. That’s a clear victory. Because of our work, she may even be able to file a sex discrimination lawsuit against IBM for providing perks for the men that she doesn’t get.

But we still have far to go–to the bastions of power such as golf clubs that are beyond the law and to the corporations that are seemingly beyond shame.

There’s a message here for us: Stay mad. Stay strong. And stay on their asses.

If we do that, failure is impossible.

Martha Burk’s latest book is Your Voice, Your Vote: The Savvy Woman’s Guide to Power, Politics and the Change We Need. Buy it here!

Tell IBM to stop supporting the Masters Tournament until women are allowed to compete: