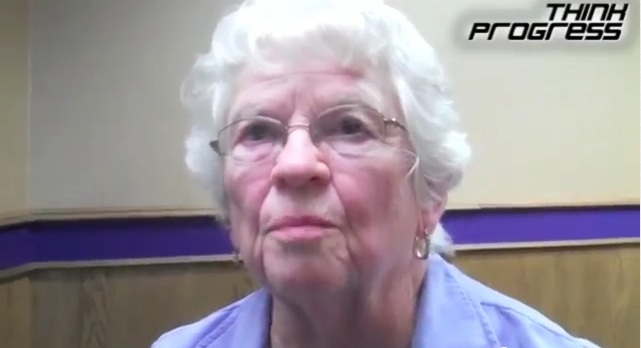 Finally, a voice of reason!

As GOP members flood mainstream media, scrambling to debunk the “myth” that women actively care about reproductive health and dismissing any fears of conservative women jumping ship come November, an Iowa resident let the Republican Party know there’s at least one woman out there who cares.

Socially conservative Iowa-based group FAMiLY Leader has been pressuring the state legislature to deny any taxpayer money to Iowa’s 23 Planned Parenthood centers. The money Planned Parenthood receives from the state covers preventive healthcare, including breast and cervical cancer screenings, pap smears and prenatal care. None of it covers abortions. This is a fact the GOP has also decried as a “myth” or “lie” or, simply, a fact they’d rather not acknowledge—to the detriment of low-income women and their health. We’ve already seen it play out in Texas, where Gov. Rick Perry’s stubborn, self-appointed mission to “protect the unborn” has disenfranchised 130,000 already-born women.

So, at a town hall meeting in central Iowa on Tuesday, Shirley Grant attempted to set the record straight. A supporter of Planned Parenthood and advocate of healthcare access for low-income women, Grant had more than a few choice words for state Rep. Steve King about his incessant attacks on the organization.

Grant starting off by throwing the ole double standard back at King: Pro-choice women, she patiently explained, want to “take charge of their own destiny” just as he “took charge” of his own as a young man. Then Grant fired off this elegant statement:

My daughter says, “Throw out the word ‘birth control,’ Mom. Planned Parenthood isn’t that.” She says it is for hormone replacement, and that means you use those pills for many, many, many different areas of women’s lives. I find it very offensive that men think they can tell women what to do with their own life. I think the political arena is making a big mistake when they don’t work with Planned Parenthood, instead of against it. They do so many good things.

Makes you wonder how some of these war-on-women politicians got their positions of power over tough-talking, informed women like Grant.

Photo of Shirley Grant from town hall video by ThinkProgress.