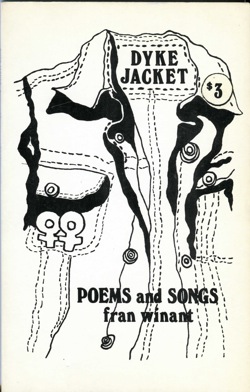 Winant—a founding member of the Gay Liberation Front in 1969 and its sister group, Radicalesbians, in 1970—started Violet Press in 1971 in order to publish her first chapbook, Looking at Women. The press went on to print We Are All Lesbians (1973), one of the first lesbian poetry anthologies. Winant put out two more of her own collections through Violet Press, Dyke Jacket: Poems and Songs (1975) and Goddess of Lesbian Dreams: Poems and Songs (1980).

Winant’s poetry reflects the unfolding of lesbian feminist thought over the ’70s and touches on major milestones of the gay and lesbian movement. Her collections were notable for combining poems with songs and images, such as her portrait of Toklas (below). 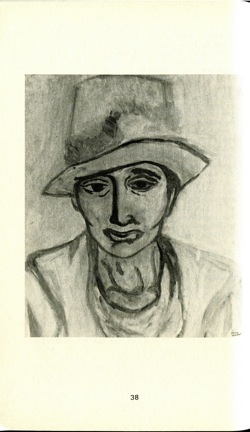 we traveled to the country

bouncing along in an automobile

the sun beat directly down

feeling it on my head helps me think

we bought melons at every town

until the car was filled

ate in a small restaurant

where the fish was excellent

fed the dog under the table

we returned at evening

to sit before a fire

smelling a fire-scent found in nostrils

pleasure swells from inside

to be made visible in things

that seem less than itself

in this way life is realized

shadings of many days

make the moment that a poem is

the butter must be tasted

and the cow seen

it takes many books to equal

one taking in and letting out

a photograph caught us

walking our dog on a cobbled street

standing in our garden

years later we are still there

but not in the same way as poetry

the curve of a melon

can be described as

in which many rounds are represented

the curve of the sky, hills

and aspects of ourselves

can thus innocently be

the sun that beats directly down

that spreads from your fingertips

as a painted canvas does

the smoothness of the tabletop

brings you close to me

although you are lying upstairs

the grain of the wood

is the line of your eyebrows

because you are always with me

it is not true

that I go off alone to write

“Yesterday,” copyright Fran Winant, reproduced with the permission of the author. This poem first appeared in Amazon Poetry: An Anthology of Lesbian Poetry (Out & Out Books, 1975; republished as Lesbian Poetry in 1981 ), co-edited by Joan Larkin and Elly Bulkin. It was reprinted in Winant’s Dyke Jacket: Poems and Songs (Violet Press, 1976).

Winant on GLF and Radicalesbians