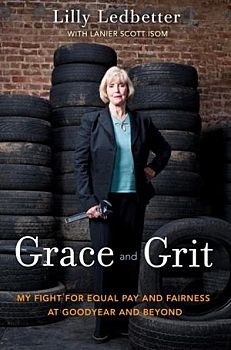 A review of Grace and Grit: My Fight for Equal Pay and Fairness at Goodyear and Beyond

“I was like a wife nursing a nagging suspicion that her husband’s having an affair, with no hard evidence. But now there it was in plain black ink,” writes Lilly Ledbetter, a former Goodyear plant manager, describing the moment in 1998 when she learned, through an anonymous note, that male managers hired the same year she joined the company out-earned her by more than $13,500, a third of her salary. That note, the last straw after years of abuse on the job, moved Ledbetter to sue Goodyear in a pay discrimination case that became a legal landmark. But as this memoir reveals, her story was far more compelling than the version found in legal briefs or news clippings.

Ledbetter was raised in Possum Trot, Ala., in a home without running water or electricity. She remembers a brutal grandfather who tried to kill her beloved dog and a childhood spent picking cotton. For many in 20th-century rural America, a manufacturing job was a lifeline to prosperity, and at an early age, Ledbetter imagined how easy life would be if her father worked at the Goodyear plant in nearby Gadsden.

In 1979, at the age of 41, Ledbetter herself got that job. Her hard labor at Goodyear helped transform her family’s standard of living in just one generation: While her own mother had rarely bought her a book, Ledbetter’s children graduated from college. Yet the humiliation and harassment she endured as one of the few women in management was staggering. Male coworkers propositioned her and, when rebuffed, retaliated by making her job harder and depriving her of merit raises.

A 2003 trial jury awarded Ledbetter $3.8 million, but an appeals court later ruled for Goodyear, saying the initial discriminatory decision to pay her less than her male peers had occurred too long ago. She should have sued when the discrimination first began, the court said, even though she couldn’t have known of the salary discrepancy. Despite a ringing dissent by Justice Ruth Bader Ginsberg, the Supreme Court upheld this illogical reasoning.

Though Ledbetter will never see her own pay injustice redressed, she has already seen her story bring justice for others. In 2009, Congress passed the Lilly Ledbetter Fair Pay Restoration Act, which clarified that discrimination occurs not only when unequal pay is set but also each time an unequal paycheck is issued. Outcry over her case also helped mobilize support for the Paycheck Fairness Act.

Ledbetter’s account of her relationship with her husband is an intriguing parallel story. Charles, who died shortly before President Obama signed the Ledbetter Act, was a devout Christian who, when he and Lilly first married, demanded obedience. He voted Republican; she, Democratic. But he was her best friend, supporting her fight against Goodyear and protecting her when he could. This story of a lifelong struggle for fairness deserves to be widely read not only as a document of a case so stunningly unjust that it sparked legislative change, but also as an introduction to a remarkable woman who also happens to be an outstanding storyteller.

Liza Featherstone is the author of Selling Women Short: The Landmark Battle for Workers’ Rights at Wal-Mart.

Reprinted from the Winter 2012 issue of Ms. To have this issue delivered straight to your door, join the Ms. community.

The Paycheck Fairness Act still hasn’t been passed! You can voice your support here.