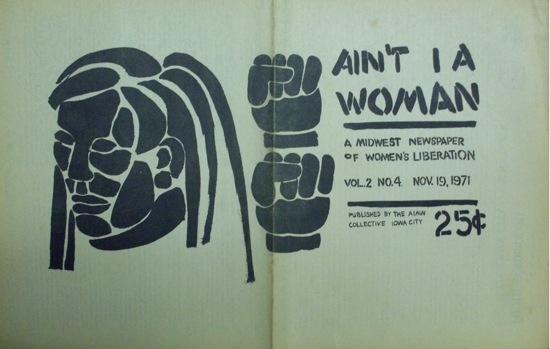 In 1973, Ain’t I a Woman, a feminist newspaper in Iowa City, published and distributed the anthology Because Mourning Sickness is a Staple in My Country, an anonymous collection of “poems by working-class dykes who have been going through changes and writing poems, among other things.” Printed on newsprint, the small book is “designed to fit your back pocket.”

None of the poems in the collection are attributed to a particular author, a choice that highlights many lesbians’ need for anonymity during the 1970s. The consequences of coming out could be severe: denial of parental custody, job loss or violence. It’s possible, too, that the authors in Because Mourning Sickness is a Staple in My Country chose anonymity to avoid what they perceived as a patriarchal star-making machine. Some lesbian feminists critiqued the mainstream media’s anointing of feminist “stars”–who tended to be photogenic, of European descent and heteronormative in appearance. By remaining anonymous, authors in the anthology insist on attention to their words and experiences.

There are many poems in Because Mourning Sickness is a Staple in My Country that will resonate with contemporary readers: poems on breaking up and losing lovers, on loneliness and isolation, and on joy and empowerment. Here I’ve reprinted two poems that capture women’s experiences working. “On Becoming a Dedicated Public Servant” describes a deadening experience of office work, while “There are never wastebaskets” provides a house cleaner’s reflections on picking up the detritus of people’s lives.

Both invite us to think about work and ask ourselves, forty years later, how much has changed.

On Becoming a Dedicated Public Servant 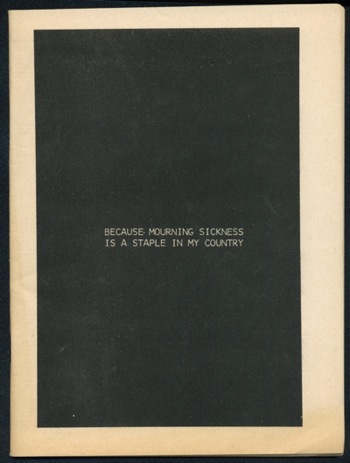 With midnight splash in bursting brook

my barren head sought nurture for

the dream would fade before the day

and crazed with thirst

from this dead sea of paper.

Similarly, in “There are never waste baskets,” the poet’s alienation—and anger—about her work is powerfully rendered. (You can read the full anthology at the Lesbian Poetry Archive.)

There are never waste baskets

in the right places

Without thinking about it very much

you stick their garbage in your pocket

the garbage that’s too big

to be sucked in by the vacuum

the crap that’s too little but unsightly

you know they want them to look clean

without thinking about it very much

Sticking other people’s garbage in my pocket

and I always intended to write a poem about it

just like I always intend to clean my own house

so it looks as nice as theirs

I never do have the time though

and I have found difficulty

in locating my proper dwelling

Our lives are full of intrusions

sensible and logical demands from

a world of definitions that don’t define us

that don’t tell me what it is

this being a lesbian

The intrusions are always immediate

and they take up all my time

Even when I begin to feel

the groping pins of self discovery

I am interrupted and involved

before I see the involvement

for the interruption it really is

Everybody and me too – I knew

I really wasn’t doing anything anyway

Without thinking about it very much

Picking up the garbage cleans their rugs

and dirties your pockets

A friend of mine one time said

she realized how unacceptable this life was

but if it was charitable

well, something for free is better than nothing

but thinking about having to work so hard

at surviving to live

the way you don’t want to live

makes you at least contemplate

not working at all

I am finally running scared

and thinking very much

about the things I do

without thinking about them very much

I don’t want to die

or with blue little tabs from

pampers that were on other people’s babies

I do not want to die

so full of their world

I would rather even

that I die a woman emptied.

Because Mourning Sickness is a Staple in My Country (chapbook)

Photos of feminist newspaper Ain’t I a Woman (TOP) and front cover of the anthology Because Mourning Sickness is a Staple in My Country (RIGHT) courtesy of the Lesbian Poetry Archive.