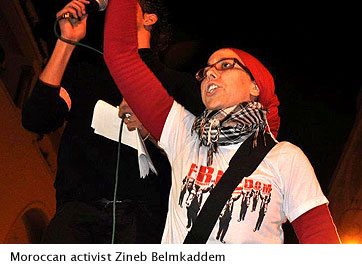 Rabat, Morocco. Zineb Belmkaddem hadn’t ever given much serious thought to political activism. She didn’t believe she could really change things.

Then came the uprisings in nearby Tunisia.

“I was in awe and shocked that young Arab people can actually do something to change the political scene,” said 27-year-old Belmkaddem in a cafe here earlier this month, wearing Ray-Ban sunglasses and a white hijab. “It was impressive. Then it happened again in Egypt and my shock increased. It was the first time I decided it was worth getting involved.”

The wave of protests sweeping the region soon hit Morocco, and Belmkaddem responded to a YouTube video’s call out for Moroccans to join pro-democracy protests on Feb. 20 last year. Thousands of others from across the country also participated to demand reforms, including checks on the monarch’s power, dignity, social justice, democracy and freedom.

She became part of the core of what’s become known as the February 20 Movement, a mostly youth-based pro-democracy group. While the movement has lost steam since last year, members say it still has presence and potential.

“The February 20 Movement, plus the general protest mood in the region, is making people feel they can speak for their rights,” said Belmkaddem, a single mother who works as an international coordinator for a Netherlands-based research company and also writes for the Moroccan activist website Mamfakinch. “It’s enabling women and people in general to speak for their rights.”

As young women such as Belmkaddem take a leading role in sustaining the country’s pro-democracy ranks, they may be helping to shift the society’s conservative gender attitudes, said Naima Elgallaf, a human rights lawyer in Rabat. “In Morocco, women out in the streets was a big deal. In conservative societies in general when there’s a presence of women, and women with strong beliefs, it surely has a big impact on society.”

Twenty-one year old Kamilia Raouyane is another young woman who has been active in the February 20 Movement since it first came together on Facebook and Twitter. Like many in the movement’s core, she remains unsatisfied with the king’s reforms.

“We want real, radical change: a civil state, a democratic regime, a real popular constitution. We want good education and a good system of justice. Stop arresting people for their ideas and have equality between the sexes in all fields,” said Raouyane.

While the movement didn’t focus on women’s rights, gender equality was part of the political mix. In response, article 19 of the reformed constitution makes men and women equal citizens under the law and recognizes that women–in addition to having equal civil and political rights already laid out in the old constitution–have equal economic, social, cultural and environmental rights.

However, like many articles in the constitution, No. 19 has a qualifier clause that leaves things open to interpretation. The slippery wording recognizes coexistence with the kingdom’s laws and a constitution that elsewhere establishes Islam as the state religion.

Some in the movement, Raouyane said, also wanted to enshrine other women’s rights, such as equality in inheritance. Currently women inherit half as much as men based on interpretations of the Qur’an.

Raouyane, Belmkaddem and others in the group’s core continue to protest and push for such changes, despite some threats and opposition. Raouyane said at the start of the movement she received calls at 3 a.m. from someone calling her a whore and threatening sexual violence. Elgallaf said she received threatening messages via Facebook and a picture of her was posted online with the caption “Lawyer of Gays.” Others in the movement, men and women, were said to have been called homosexuals and atheists, terms that were used as slurs.

“My grandma, every time I meet her, she says don’t protest, you will go to jail, they will beat you,” said Raouyane, an intern at the Moroccan Association of Human Rights. “But I’m not afraid. I really believe in it. If I don’t do this, no one will do this for me.”

Photo courtesy of the author; all rights reserved.

Juhie Bhatia is a journalist focused on gender and health issues. Formerly the managing editor of Women’s eNews, she’s also written for The Guardian, Rolling Stone, Nature Medicine and Bust magazine, among others.