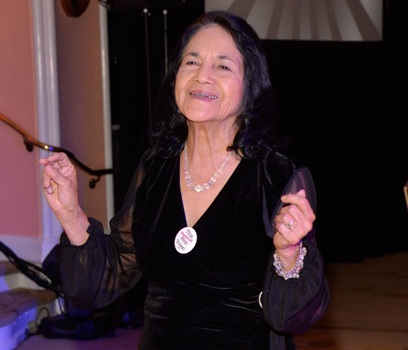 We were already tipped off that retiring University of Tennessee women’s basketball coach Pat Summitt would be a recipient of the Presidential Medal of Freedom, the country’s highest civilian award. And today we learned that four other fabulous women will also be so honored: former Secretary of State Madeleine Albright, author Toni Morrison, Girl Scouts founder Juliette Gordon Low (who died in 1927) and United Farm Workers‘ cofounder Dolores Huerta.

Around the Ms. and Feminist Majority Foundation (FMF) offices, we’re particularly excited about the medal going to Huerta, who is a member of the FMF board and an ever-present inspiration. Having just turned 82, she doesn’t seem to have slowed down a bit in her activism (or on the dance floor, for that matter), still fighting for workers, immigrants, the LGBT community, women and anyone else not receiving fair and equal rights.

Check out this interview with Amy Goodman about what Huerta is currently doing with her Dolores Huerta Foundation. And this Nation video of Huerta talking about how she decided to become a farm worker organizer, despite having seven children to care for:

And speaking of the Girl Scouts–which celebrates its 100th anniversary this year–there’s now a Dolores Huerta Girl Scout Patch!