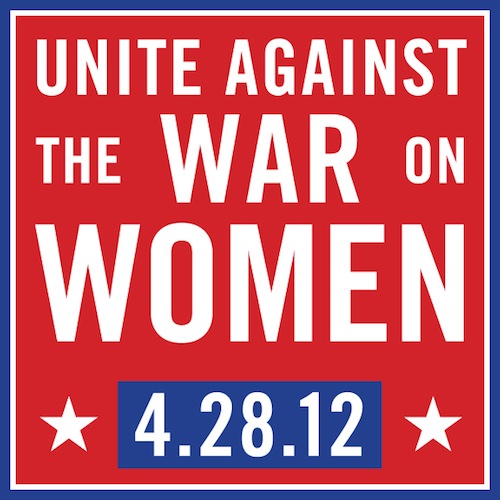 “I find this onslaught of anti-women legislation repulsive,” says 23-year-old Amanda Velez. “These proposed laws condescend to a level where women are treated as something much less than human.” A resident of Elizabethtown, Kentucky, Velez told me her feminist views are often met with hostility in her “typical Bible Belt” state.

It’s April 28, which means thousands of women and men across the nation are convening in state capitals and major U.S. cities for the Unite Against the War on Women rally. Started as a Facebook campaign just two months ago, the UAWOW rally has quickly become 2012’s largest grassroots women’s rights march to date, with events planned in 46 states and Washington, D.C.

The War on Women has been a “trending” topic in 2012—so trendy that the GOP and some in the mainstream media spend a lot of time calling it a “myth,” “fiction” and a “distraction.” But unfortunately, it’s all too real. In case you’re still on the fence about this whole “myth-fictional-distraction” thing, here are just a few reasons to march against the War on Women:

1. The War on Choice: In recent years, anti-abortion politicians have taken over state legislatures. Although 2011 saw a record high of anti-choice laws, here are some of the pieces of legislation that have piled up in 2012 alone:

2. Slut-Shaming Women Who Use Birth Control: Everyone from Catholic Bishops to Gov. Jan Brewer of Arizona is up in our uteruses lately. When the Conference of Catholic Bishops learned that Catholic hospitals might have to dispense birth control at no charge under the health care plan, they had a collective freakout and began calling Congress. So the GOP pushed the Blunt Amendment. Then an all-male, uterus-free panel of “experts” testified before Congress on the subject. But it wasn’t until Rush Limbaugh labeled birth-control advocate Sandra Fluke a “slut” that the real colors of the anti-birth-control crowd showed: They find a woman’s sexuality shameful and immoral.

3. Equal Pay? No Way! Wisconsin Gov. Scott Walker’s unceremonious repeal of the Equal Pay Enforcement Act right before Equal Pay Day made us realize why we need equal pay more than ever. Currently, there are eight states (plus Wisconsin) devoid of any equal pay laws. American women make, on national average, 77 cents to a man’s dollar. And female college graduates earn $1.2 million less during their lifetimes than their male peers.  Yet the Paycheck Fairness Act has stalled in Congress.

5. Violence Against Women Act: When the Violence Against Women Act came up for vote this week, 36 Senators voted against it. Now the House GOP is working on a version that strips protections for Native women, lesbians and undocumented immigrants.
Still not convinced you should break out your protest signs? For Velez, who’s traveling more than an hour to attend the Louisville rally, the reasons to get yourself to your state capital today go far beyond the political battles of the moment. “Women’s experiences of oppression can be utilized as a platform from which to advocate equality for all,” she says. “My goal as a feminist is to improve my life and the lives of all women while also empowering other minority groups.”