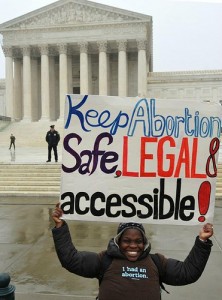 As a clinic assistant at two Planned Parenthood clinics, I’ve listened to approximately 1,000 women tell me about their abortion decisions. These women came from all over the world. Some were mothers, students, wives or girlfriends; some were only girls. They were different in many ways, but what they wanted was the same: a safe abortion, without judgment or harassment.

Unfortunately, that is becoming harder and harder to obtain.

According to the latest state legislative round-up from the Guttmacher Institute, 944 reproductive-health-related laws were introduced in just the first quarter of this year. Half of these bills aim to restrict abortion access. Seventy-five of those abortion restrictions have been approved by at least one legislative chamber, and nine have been enacted. While this is not as high as the record-breaking 127 passed by at least one chamber in the first quarter of 2011, it is still a lot, especially for an election year (when candidates are warned to stay away from “divisive issues”). Among those that passed or are looking to pass in 2012 are several “heartbeat” bills, which either ask or mandate that women listen to the heartbeat of the fetus or embryo.

It’s difficult to read about such bills without getting frustrated. The basic assumption behind such legislation is that women do not know what is happening to them–that without these bills, women would get abortions out of ignorance. They assume that if women are not given the opportunity to hear the heartbeat, or in other cases, see an ultrasound or read state-mandated information (of questionable accuracy), that they just won’t know what they are doing. In even worse cases, states such as South Dakota mandate a trip to a crisis pregnancy center–which operate solely to shame women out of having an abortion. Apparently we can trust a woman to have and raise a child, just not to decide when to do it.

When I spoke with a woman who had originally planned her pregnancy with her husband only to have their circumstances change when he was deployed to Afghanistan, I knew that she was aware of what she was doing. She wanted to be a parent, but not a single parent. Likewise, when I spoke to a woman who was herself deploying to Iraq, I knew that she didn’t need to see an ultrasound or to listen to a heartbeat to know what her decision entailed. She was doing what was needed in order to serve her country.

I also think it’s safe to say that the patients who were already mothers had a pretty good idea of what was going on in their bodies. They knew that those pregnancies they carried would eventually come to term and that they would have to raise another child. This was not new territory for them. Some of these mothers were so sick during their pregnancies that they were not able to work or care for their children. Other mothers could not afford another pregnancy for financial reasons. Still others simply did not want to be pregnant again.

All of these women, for all of their reasons, knew what they were doing. When they did have questions, the clinic staff answered them. Once in a while a woman would ask to see the ultrasound, so the clinic assistant would show it to her. As a patient, she had a right to access her medical file, of which the ultrasound was a part. Unlike crisis pregnancy centers, however, we used medically accurate language and did not condemn anyone for her decision. In the rare cases in which a woman wasn’t sure what to do, a counselor would talk to her, and sometimes even suggest that she go home and think for a while longer. Regardless, the final decision was always hers. More often than not, however, our patients had already thought about what they needed to do, and they just needed it done–safely and with dignity. We owe them that much. Our sisters, our friends, our mothers, our daughters, our girlfriends and our wives deserve our respect. We can trust them, and our laws should reflect that.