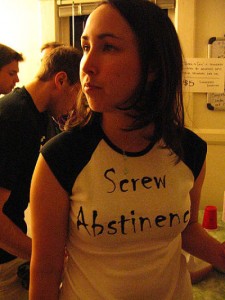 From the Ms. Editors: Despite doubts about the efficacy of abstinence-only sex education,  U.S. tax dollars are still funding it. Conservatives earmarked $250 million for such programs under the Affordable Care Act, and last month, the Obama administration controversially green-lit the Heritage Keepers abstinence-only curriculum to receive funds reserved for evidence-based sex education. The excerpt below, from Katherine Stewart’s recent book, The Good News Club: The Christian Right’s Stealth Assault on America’s Children, takes a detailed look at the problems posed by abstinence-only education.

Abstinence education posits the idea that the proper way to educate adolescents about sex is to instruct them to refrain from sexual activity until marriage. The way to avoid contracting an STD or an unwanted pregnancy, a typical program tells its students, is follow a few simple rules: “Respect yourself. Choose friends who are positive influences. Go out as a group. Get plenty of rest.” Doug Herman, a popular abstinence-until-marriage speaker at public high schools across the United States, sums up the message this way: “If the sun doesn’t touch it, nobody else’s son ought to be touchin’ it either!”

The typical abstinence program, however, is not against sex per se. Abstinence instructors often make a point of telling teenagers that they know how hard it is to refrain from sexual activity. Sex is wonderful, it is incredible, it is mind-blowing—if you are married. The principal goal of most such programs, in fact, is to imbue children with a certain view about the proper relationship between sex and marriage. Sex within marriage is a source of fulfillment and even ecstasy; sex in all other contexts is degrading and shameful.

Abstinence educators frequently promote this view by representing all sex that occurs outside the marital bed as harmful. Premarital sex is dangerous and dirty, they say—a gateway to decadence, depression, broken lives, and an early grave, especially for women. If you have sex outside of marriage, says Pam Stenzel, a nationally recognized “abstinence proponent” who delivers talks to public school students around the country, “then you will pay.”

Not having premarital sex, on the other hand, is always posited as beneficial. GamePlan, an abstinence course developed by A&M Partners (formerly Project Reality) and taught in public schools around the country, offers as evidence the instructive tale of Steve, who resisted his girlfriend Tina’s sexual overtures. Tina, the little tramp, was already pregnant when she asked Steve to have sex with her, and faced a dead-end future as a single teenaged mother. Steve, however, met his future wife, the virginal Karen, six years later at college.

Of course, Steve wouldn’t have considered using protection when he had sex with Karen or Tina—A&M Partners opposes the idea that discussion about condoms and other methods of contraception belongs in sex education programs.

Many abstinence education programs make cheerful use of gender stereotypes. The Just Say Yes curriculum, used by twelve public school districts including Dallas’s exclusive Highland Park Independent School District, tells teens that abstinence means “you make a conscious decision to avoid turning others on,” and continues to explain that “if a guy is breathing, then he’s probably turned on.” The text continues by advising girls “to think long and hard about the way you dress and the way you come on to guys.” A woman who “shows a lot of skin” is either “ignorant when it comes to guys,” is cruelly “teasing” men, or is “giving her boyfriend an open invitation” to have sex with her. The responsibility for policing the boundaries of sexual behavior, evidently, rests on women alone; men, according to the Just Say Yes way of thinking, can hardly be expected to control themselves.

Abstinence-until-marriage sex education courses are taught by a wide variety of outfits. Some operate on a large scale, serving multiple communities in dozens of states. Others work with a single school district. In almost all cases, however, the sponsoring organizations are religious in nature or have thrown themselves into the business of sex education for transparently religious purposes.

Youth for Christ, which receives federal funds to teach abstinence education in public schools all over the country, makes no effort to disguise its agenda. “YFC goes where kids are,” says a 2010 press release from the West Michigan branch of Youth For Christ. “With programs like Campus Life (reaching public high school and middle school campuses) … YFC carries the Love of Jesus Christ to all different kinds of kids in many different situations.”

Some abstinence education programs do allow for discussion of the role of contraception and safe sex practices in preventing unintended pregnancies and sexually transmitted diseases. In many cases, however, these “abstinence-plus” programs, as they are known, spread disinformation rather than information about sex. According to a report by the Texas Freedom Network, factual errors are taught in the health programs of 41 percent of Texas public school districts. The most common errors concern condoms and their efficacy, such as the notion that the HIV virus can pass through latex. In a theatrical exercise from the Brady Independent School District in Brady, Texas, students are told that condoms have a 30 percent failure rate in “preventing most STDs” and that “HPV and Syphilis are so small that they can slip through condoms.” One character in the theatrical production says, “Giving a condom to a teen is just like saying, ‘Well if you insist on killing yourself by jumping off a bridge, at least wear these elbow pads—they may protect you some?’”

Misinformation about other STDs is also pervasive. Programs such as the Austin LifeGuard Character and Sexuality Education, used in ten school districts, teaches that there is “virtually no evidence” that condoms reduce the risk of the HPV (human papillomavirus) infection and alleges that “about a third” of all in vitro fertilizations can be linked to infertility caused by STD infections —in spite of evidence to the contrary from the American Society of Reproductive Medicine. At least one Texas curriculum, Wonderful Days, taught the dangerously false notion that “natural fertility regulation”— the rhythm method —has the “highest user effectiveness rate.” In an attempt to help students understand fertility, Wonderful Days offered an outlandish little rhyme: “If a woman is dry, the sperm will die. If a woman is wet, a baby she may get!”

Abstinence education may not have stopped young people from having nonmarital sex or diminished the rates of unwanted pregnancies or STDs, but it has benefited at least one constituency: evangelical religious organizations.

Katherine Stewart was born in Boston, Massachusetts. She started her career in journalism working for investigative reporter Wayne Barrett at The Village Voice and freelanced for Newsweek International, Rolling Stone, Marie Claire and others. She cowrote the book about the musical Rent and, after moving to Santa Barbara in 2005, published two novels about 21st century parenting. She is the author of the 2012 book The Good News Club: The Christian Right’s Stealth Assault on America’s Children. Most recently she has written for The New York Times, The Guardian, the Daily Beast, Bloomberg View, and Religion Dispatches. She lives with her family in New York City.