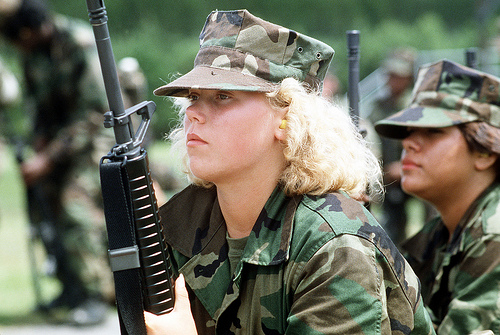 In February, the Department of Defense announced it would loosen its restrictions on women in military combat roles, allowing them to “co-locate” closer to the front lines with ground combat troops. It would also open up 14,000 new job opportunities for women soldiers.

That new policy took effect this past Monday. But DoD still hasn’t take the next step: allowing women in combat.

Sen. Kirsten Gillibrand (D-N.Y.) would like the department to change that policy once and for all, and has drawn up the Gender Equality in Combat Act  to “require a report on implementation of a terminination of the ground combat exclusion policy for female members of the Armed Forces.” Under the act, the secretary of defense would be required to deliver a report in one year on how he would implement ending the old policy.

As Ms. magazine pointed out in its Fall 2011 story by Molly M. Ginty, “All Guts, No Glory,” women already are in combat roles, even if they’re not recognized as such. Hundreds of women soldiers have been injured and died in the Iraq and Afghanistan wars, yet the pretense remains that they’re not operating machine guns or finding themselves in the midst of firefights. Without such recognition of their actual service, it’s harder for them to gain certain promotions or receive proper treatment for battle stress.

According to the Huffington Post, Gillibrand is hoping to incorporate the bill into a larger defense appropriation that the Armed Services Committee will begin work on next week; failing that, she’ll offer it as stand-alone legislation or an amendment.

Photo of Marine recruits at basic training by Flickr user expertinfantry  under license from Creative Commons 2.0

Kirsten Gillibrand: Taking On Military Sexual Assault, One Bill at a Time