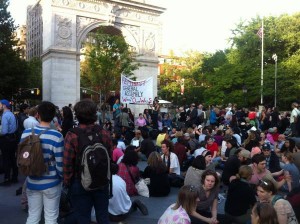 “What took so long?” was the general sentiment among those gathered in Washington Square Park in Manhattan last night for Occupy Wall Street’s first ever Feminist General Assembly.

Despite being woefully overdue, May 17 was a beautiful and significant night: Not only was it the eight-month anniversary of our movement, it was also the International Day Against Homophobia and Transphobia and the 181st anniversary of the First Women’s Anti-Slavery Convention. This intersection of issues created a perfect backdrop for discussing the challenges and importance of feminism to Occupy Wall Street–a movement often criticized for being stubbornly multi-issue.

I arrived to find a diverse crowd of around 300 people. Members of the Occupy Wall Street women’s caucus, Women Occupying Wall Street (WOW), were giving a shout of solidarity to Occupy Maine. The people of Lafayette, Ind.; Bend and Portland, Ore.; Chicago and a handful of other cities were also holding feminist GAs. The Raging Grannies sang  “Evolution is too slow, revolution’s the way to go!” and things were off to a raucous start. I pitched in with a paintbrush to help record the shared values we were brainstorming–“Trust!” “Creativity!” “Justice!” “Humor!”–and, ignoring my friend’s smirk, embraced the consciousness-raising exercise as though I were encountering it for the first time. After focusing almost exclusively on women’s organizing for the first six months of Occupy Wall Street (OWS), I was happy for the chance to just participate. More importantly, I was happy to see so many new leaders and so many of the elusive “unfamiliar faces” we had spent meeting after meeting trying to attract to the movement.

When we broke into smaller groups to discuss feminist goals for the Occupy movement, the fresh spring air had a cleansing effect on issues that felt dusty and spoiled. One young person who had never been to an Occupy Wall Street event and didn’t identify as a feminist shared a concern about not being taken seriously when calling out sexist behavior. A woman in a wheelchair spoke about how her disability had led her on a journey of liberation from societal standards of beauty. A member of OWS’ Safer Spaces group reminded us that:

Ally is a verb. It means more than just saying you’re anti-racist. It means doing something.

Someone with a sign that read “Women against Ableism and Sexism” argued that we can’t be feminists without being against war. We discussed how being a feminist means moving beyond capitalist conceptions of productivity to value things like food and family and fun–and how we can model this in our own lives and in our organizing.

The Assembly closed with a moving performance from the Mahina Movement, and I silently checked “fun” off the list of feminist accomplishments for the evening. As I biked home to Brooklyn with two friends from the OWS men’s circle, which had offered childcare for the event, I learned that they spent most of their time “baby-sitting” disgruntled men who would otherwise have disrupted the evening’s proceedings. Figuring their active allying made up for the shortage of actual children, I checked off “family.” My stomach was empty–OWS lost their kitchen space at the last minute–but I figured that for a first attempt at re-imagining OWS as a feminist community, two out of three wasn’t bad. A new world–a feminist world–was definitely possible.