How I Learned to Stop Worrying and Love Sandra Bernhard - Ms. Magazine
Skip to content 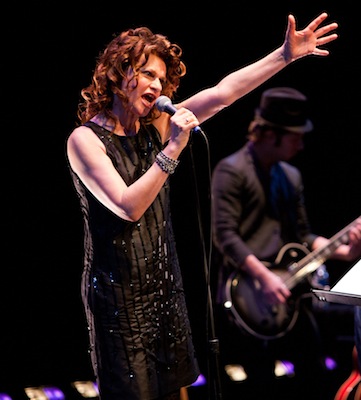 “Have you ever seen The King of Comedy?,” the aspiring-screenwriter and Scorsese fan asked, as if that would settle things. A trip to Blockbuster and a few hours later I said, “Wow. That’s an amazing movie. But … I still don’t really understand Sandra Bernhard.”

It’s hard to write about a cult figure when you’re not in the cult. So in preparation for reviewing her new show Sandrology at Los Angeles’ REDCAT, I made another attempt at unraveling the enigma that is Sandra Bernhard. Her irony has always appealed to me, but I wanted to know, what’s it all about? What is she really getting at?

In her movie Without You I’m Nothing, available on Netflix, she does a rote, almost solemn, performance of her stand-up for an all black-audience in the iconic L.A. jazz club The Parisian Room. For much of the movie, a straight-faced Bernhard recites her standard jokes about growing up Jewish as if she’s sharing common tribulations with the audience because, as she puts it, “You know our people have always gotten along so well.” No one laughs.

I thought, this is not stand-up. This is performance art. The juxtaposition of references from utterly distinct worlds, combined with her sober delivery, creates a surreality that makes you question whether she’s being funny, serious, ironic or just silly. The performance of race and ethnicity is always, like the performance of gender, a political act. But if she means to be political, what political statement is she making?

Though my appreciation of Bernhard grew with my research, my understanding of her did not, and I soon found myself in a room full of hardcore fans, all eager to see her new show, feeling like the only one who wasn’t sure what to expect.

Sandrology opens with the comedian/singer/dancer/actor/author performing Neil Sedaka’s “Laughter in the Rain.” In typical Bernhard fashion, everything about her performance–her smile, her dancing, her voice–makes you wonder, Is she serious? Does she like this song? Is she making fun of it? Is she just enjoying being on stage? Can she be doing all these things at once?

Moving with ease between personal narrative and musical tributes/sendups of Bruce Springsteen, Lady Gaga and Carol Channing, Bernhard manages to simultaneously perform and authenticate that performance as real. She perfectly suits the size of her personality and her voice to the space and to the people in front of her so that you always feel she’s being honest, if deliberately opaque. References to her girlfriend and her family–she is clearly the “patriarch” of her family and proud of that–flow easily off her tongue and land just as easily in the audience’s open minds.

Though advertised as a whole new show, you may notice that Bernhard’s references are oddly dated: Bristol Palin’s role as spokeperson for Candies‘ abstinence campaign (which she criticizes not by taking down Palin or abstinence but by attacking the quality of Candie’s shoes), the Royal Wedding and Michele Bachmann. Eventually she admits that she’s not doing an entirely new show, but even then the guessing game as to what is new and what is not, what is improvised and what rehearsed, continues to throw the whole nature of the performance into question. As if in answer, while describing a past romantic attraction she adds as a sidebar, “Don’t try to pigeonhole me. Unexpected things get me going. Like my plumber.”

In a perfectly fitting conclusion to an evening of non-sequiturs and name dropping, Bernhard performs a medley of “Sex Shooter” and “Janie’s Got a Gun,” wagging her butt at the audience as if to say, “You may not have gotten what you expected, but you can’t deny you got me.”

I have never understood Sandra Bernhard, but I sure do like her. After all, just because she is a Jewish, feminist, lesbian mother head-of-household who makes her identity part of her work doesn’t mean that her work has to fulfill this critic’s desire for a clear political message. Politics aren’t that simple and neither is Sandra Bernhard.

Get tickets for Sandrology if you can (only five performances left). If you can’t and, like me, want to know this woman better, check out Ally McBeal, Season One, Episodes 8 and 9 and Without You I’m Nothing. And you should definitely see The King of Comedy.