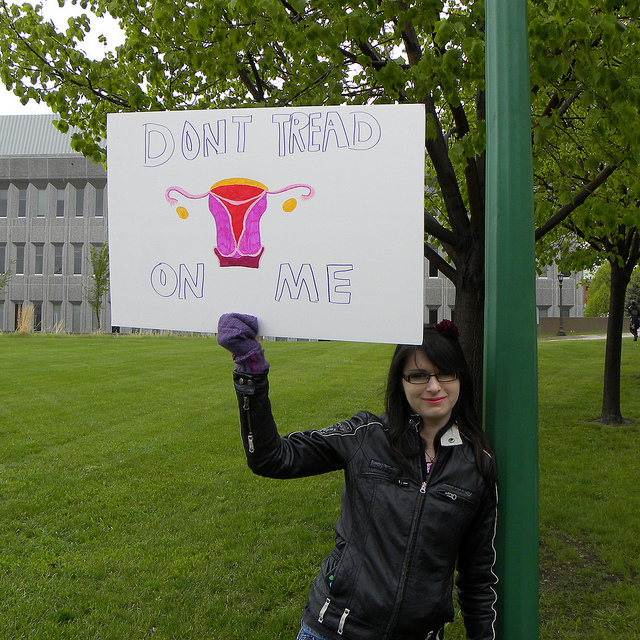 This week, the War on Women in Michigan moved from low-intensity combat to a full-scale firefight. Without warning, state Rep. Bruce Rendon (R-Lake City), launched a package of three anti-choice bills (H.B. 5711, 5712 and 5713) that represent an unprecedented assault on reproductive rights.

Among other things, the bills would turn conscientious health care providers of late-term abortions into felons and force most of the state’s reproductive health care centers to close.

“We’ve never seen such a stealthy introduction,” says Rana Elmir, communications director of the Michigan ACLU. In a blitz executed with cold precision, the Health Policy Committee introduced the bills on May 31 and held an unusually short 1-1/2 hour hearing today before calling a vote. The conversation was cut off before more than 80 representatives from major pro-choice organizations across the state had the opportunity to voice their dissent, according to a spokesperson for Planned Parenthood Mid and South Michigan.

“We were just shut down,” said Meghan Groen, director of government relations for Planned Parenthood Advocates of Michigan.

All three bills passed committee. Although the state’s legislative session is scheduled to end June 28, anti-choice politicians are pushing these bills through the legislature hard and fast. If the bills end up before a full House vote, they are expected to pass, due to Michigan’s current anti-choice majority.

Why the rush? “This is about delivering favors for special interests,” says state Rep. Kate Segal (D-Battle Creek). “It is an election year.” According to Mary Pollock, legislative vice president for Michigan NOW, the 59 percent of legislators who are in their first terms are looking to beef up their legislative records before the Michigan primary on August 7. Anti-choice state lawmakers, she says, want to “take home some bacon for the hungry pro-lifers in the first term-ers’ districts.”

The omnibus anti-abortion package certainly represents a lot of bacon. According to Planned Parenthood’s Groen:

[This is] a 60 page overhaul of the public health and criminal code–and it was introduced at the end of last week. This is the most extreme of any state. It wraps up other laws that have been introduced in other states. It will have a dramatic effect on Planned Parenthood’s ability to provide health care services in Michigan.

How dramatic will the bill’s effect be? Here’s how Pollock of NOW breaks it down:

In sum, passage of this legislation would make safe, legal abortion virtually inaccessible to Michigan women. “It will close every reproductive health care facility in the state,” says Renee Chelian, CEO of Northland Family Planning Centers. “That means Michigan woman who rely on us will not have pap smears, birth control, annual breast exams and routine gynecology care.”

If passed, the bills would, of course, face court challenges. The ACLU is already considering legal options, says Elmir.

Instead of dealing with the very real economic issues facing Michigan, elected officials have chosen instead to embrace the war on women. I am a native Detroit-er and served as president of Michigan NOW, executive director of the Michigan Abortion Rights Action League and a board member of NARAL and Planned Parenthood Detroit. I continue to care about the health and welfare of women of my home state. But this war reaches far beyond the women of Michigan; it’s being waged all over the country and the world. We can’t allow them to win. Women’s lives hang in the balance.