The War on Women Soldiers - Ms. Magazine
Skip to content 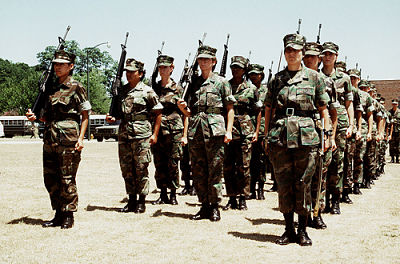 In late May, feminists celebrated the addition of the Shaheen Amendment to the 2013 National Defense Authorization Act, which would expand the Department of Defense’s abortion coverage policy for its soldiers. Currently, abortions are covered only if the woman’s life is endangered. Even if a woman in the military needs an abortion due to rape, incest or birth defects, she must pay out of pocket and receive the procedure off-base. The new amendment would extend insurance for abortions in cases of rape or incest, thus putting the military in line with such federal programs as Medicaid and the Federal Employees Health Benefit Program. The policy could make quite a difference to the several hundred active duty military women who become pregnant as a result of rape each year.

But the outlook is bleak as the bill advances to the GOP-controlled House. It may have the support of Republican Senators John McCain, Scott Brown and Susan Collins, but word on the Hill is that other Republicans will block it and that it “stands little chance of surviving” the House vote. Meanwhile, women in the military continue to risk their lives for a country which denies them full access to health care.

To support women soldiers in their struggle for reproductive justice, visit www.standwithservicewomen.org.

Photo of women in military from Flickr user expertinfantry under license from Creative Commons 2.0.