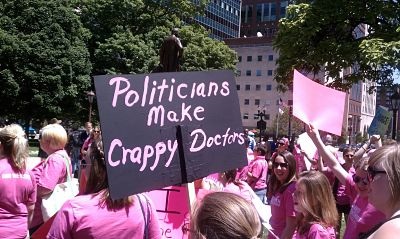 Yesterday in Lansing, Michigan, on the steps of the state Capitol, a crowd estimated at 2,500 to 5,000 watched in delight as women legislators help enact a performance of The Vagina Monologues, joined by its writer, Eve Ensler (see photo at bottom). What led up to this? Former Michigander Carol King reports:

Michigan’s rabid anti-choice legislators and their supporters have been acting like dictators and trying to shut women up.

In a series of moves to rush a package of extreme anti-choice bills from the state’s House Health Policy Committee to the floor of the House and on to the Senate, House members repeatedly refused to hear from anyone who disagreed with their desire to deprive Michigan women of their constitutional right to abortion–including women who head the state’s leading pro-choice organizations.

On June 7  Rep. Gail Haines (R-Waterford), chair of the committee, shut down a hearing on an omnibus package of anti-choice bills, refusing to allow the pro-choice women to speak (see my June 7 blog). Haines fully intended for the House to take up the package for a vote that afternoon, but many members balked at voting so quickly.

When the House convened on Tuesday, June 12, hundreds of pro-choice supporters, wearing Planned Parenthood’s signature bright pink T-shirts, held a rally outside the Capitol and then gathered in the rotunda chanting, “This is our House.”

The vote was postponed. 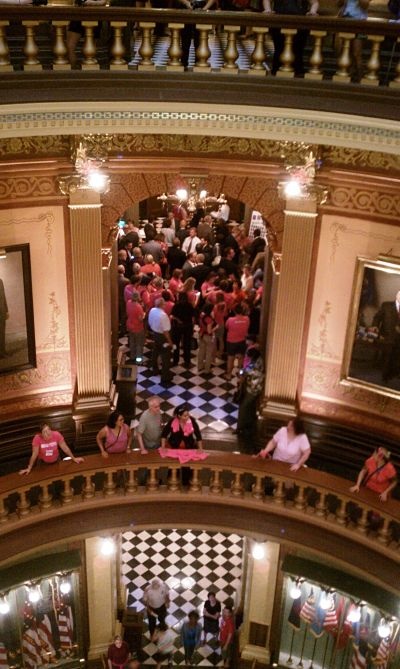 On Wednesday, June 13, during the floor debate about the bills, Rep. Barb Byrum (D-Onondaga) was not allowed to speak on her pointed parody amendment, which would have required that a man not be able to have a vasectomy unless it was a medical emergency or that the man’s life was in danger.

Rep. Lisa Brown (D-West Bloomfield), also speaking in opposition to the anti-choice bills, told her fellow House members, “I’m flattered you’re all so interested in my vagina, but no means no.” Colleagues didn’t want to hear from either of the women—or several others who spoke out against the amendment—and the House passed HB 5711, the harshest bill of the anti-abortion package. HB 5711 would impose such onerous regulations that most abortion clinics in Michigan would be forced to close.

But it all really hit the fan during Thursday’s House session. Representatives Byrum and Brown learned they were banned from speaking on the floor due to their “lack of decorum” during Wednesday’s session. Apparently Byrum’s insistence that she be heard was conduct unbecoming an elected official, and Brown’s use of “vagina” offended some of the more puritanical members of the House.

Pro-choice activists were on hand to protest again. Outraged by passage of the bill and expecting the Michigan Senate to take it up that day, hundreds of pro-choice supporters were back in Lansing on Thursday, June 14, and videos of the representatives went viral internationally.

Whether all the attention spooked the senators or they just weren’t ready to take the heat, they didn’t take action and now aren’t expected to do so until fall. The House has also postponed voting on two companion anti-abortion bills, one of which would have prohibited abortions past 20 weeks of pregnancy. Michigan legislators may be hoping that all this will die down–or maybe they have a secret plan to muzzle Michigan women over summer break.

But women of Michigan will not be silenced. Pro-choice leaders in the state plan on keeping up the pressure and reminding voters that  there’s no place for dictators in a democracy. 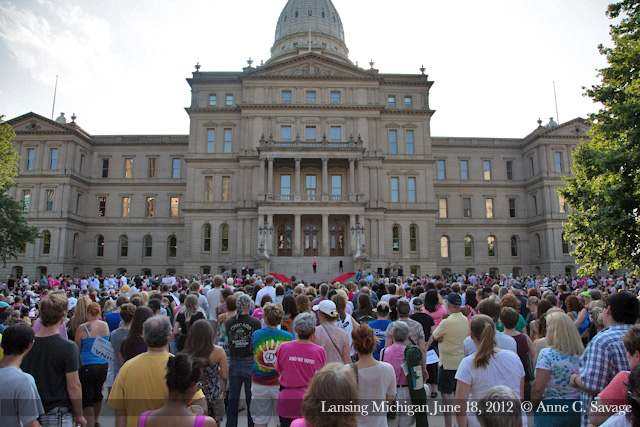 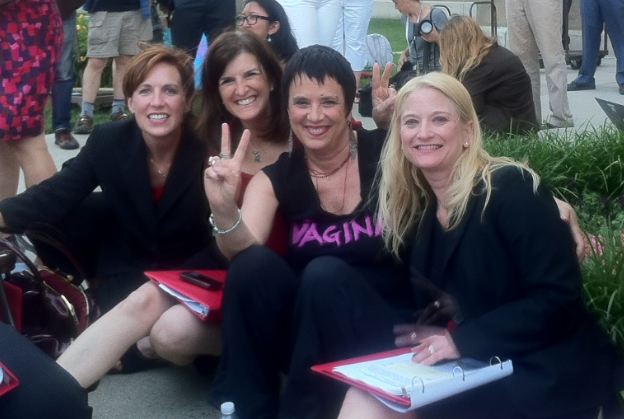