My Michigan Knows How To Treat a Vagina - Ms. Magazine
Skip to content 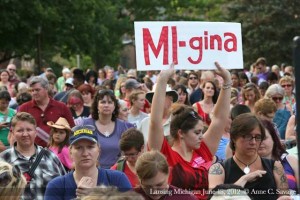 When I remember my home state of Michigan, I remember that brilliant mix of straightforwardness and amiability that exists so naturally in the Midwest. People didn’t do things like “put on airs” or think that they had all the answers. OK, some did, but by and large, I remember most people being genuinely nice and fair.

Apparently I’m nostalgic for a state that doesn’t exist anymore. At least that’s what the news is telling me. Now Michigan is taking its cues from the wave of anti-woman, anti-choice legislation sweeping across the country. Michigan was no bastion of choice before (we had 24-hour waiting laws and parental consent laws when I lived there), but it’s getting worse now. As a former Planned Parenthood clinic staffer in Michigan, I am especially upset.

The Michigan legislature recently passed a slew of antichoice bills designed to not only harm women but shame them as well. If signed into law, abortions would be harder to get on a number of fronts (via pills, by way of telemedicine, and after 20 weeks, although this bill does not look like it will become law). Beyond this, there would be no exemption for rape, incest, fetal anomaly or health of the woman.

For those women fortunate enough to still get an abortion, the anti-choice brain trust further determined that women must now bury their aborted remains. Or cremate them. Or choose interment. So, technically, there is still one choice left.

I find it abhorrent that these legislators are mandating burial procedures for fetuses, while simultaneously making it harder for women to access abortion. It’s such a glaring example of just how much they prioritize the “unborn” over the women carrying pregnancies. Inherent in this mandate is the assumption that women who choose abortion are either clueless or cruel. Why else would you mandate a funeral? Clearly we don’t know what we are doing–or worse yet we do, but we don’t care about life. So let’s have the state intervene and punish us by making us dispose of our fetuses and embryos (this begins at 8 weeks) in a way that is reserved for those who once lived. I can’t help but wonder what these patronizing zealots would find appropriate for the women who die from unsafe abortions because their access to a safe procedure was denied. What type of ceremony is called for then?

And as the Ms. Blog has reported, when a woman legislator in Michigan spoke on the House floor about this assault on women’s reproductive health and autonomy and used the term “vagina,” she was promptly banned from speaking on subsequent legislation. Banning things a vagina is involved in: perfectly acceptable. Saying the word vagina: unacceptable. Remember that question in The Vagina Monologues, “If your vagina could talk, what would it say?,” I have to believe that the vaginas of Michigan would have a few things to say about this. They would just have to do so under a pseudonym. On this note, there was a staging of Monologues at the Capitol in Lansing. That’s the Michigan I know and love.

When I worked at Planned Parenthood in Kalamazoo, I spoke with a lot of women about their decisions to terminate their pregnancies. I remember how hard it was for some of these women to get to the clinic–not once, but twice for their appointments because of the 24-hour wait. Michigan is a big state, and like most places in the U.S. there weren’t many abortion providers, so some women had to drive an hour or more, sometimes after arranging for child care and borrowing a car. Perhaps that’s not legally an undue burden, but it’s certainly a hardship for some.

Now, with this new slate of anti-abortion legislation, things will only get worse for women. There will be more hoops and fewer places to go. And they won’t even let us talk about it. Apparently that’s not appropriate.

Photo by Anne C. Savage of audience for public performance of The Vagina Monologues on the steps of the Michigan Capitol, June 18. Courtesy of Eclecta Blog