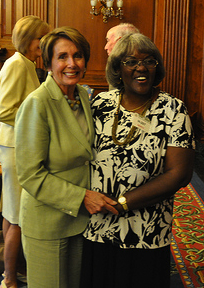 A group of women banded together more than 10 years ago to file a landmark civil rights lawsuit against one of the largest corporations in the nation.

In Wal-Mart Stores, Inc. v. Dukes, former Wal-Mart employees exposed the company’s widespread discrimination against women in pay and promotions, accusing the conglomerate of perpetuating a sex-stereotyping culture. The women, who were repeatedly told their work did not merit as much pay as that of men employees, had more than enough evidence of Wal-Mart’s discriminatory practices. Yet one year ago today, the Supreme Court ruled in Walmart’s favor and dismissed the case, delivering a huge setback for women’s equality in the workplace.

The Court’s reasoning? The women could not challenge workplace discrimination as a group because it was too large to share “common claims.”

With the Wal-Mart v. Dukes decision, the Supreme Court set a dangerous precedent that prohibited employees from collectively fighting discrimination, allowed lower-level managers to practice discrimination and pardoned companies with nondiscrimination policies even if they weren’t enforced. In an effort to mitigate the damage of the Supreme Court’s decision and restore workers’ rights and protection, the Senate and House introduced today the Equal Employment Opportunity Restoration Act of 2012 [PDF].

The EEORA allows workers with sufficient evidence to band together, despite the size of the corporation or class. The act will also permit workers to challenge subjective decisions made by managers, regardless if the employer has written nondiscrimination policies already in place.

After the Senate’s failure to pass the Paycheck Fairness Act this month, the introduction of the EEORA is a welcome victory in this uphill battle for a discrimination-free workplace. Workers’ rights activists are already praising Congress for taking the initiative to remedy the Supreme Court’s devastating ruling. Tanya Clay House, director of the Lawyers’ Committee Public Policy, said in a press statement:

This legislation has great importance to the larger civil rights community, which has used group actions effectively to address systemic employment discrimination against African Americans and other minorities.

Despite worker protection laws such as the Americans with Disabilities Act, Title VII of the Civil Rights Act of 1964 and the Lilly Ledbetter Fair Pay Act, workplace discrimination persists in the U.S. In 2011, the Equal Employment Opportunity Commission (EEOC) received a record number of employee discrimination charges—nearly 100,000 filed cases. And despite Republican senators claiming during the Equal Paycheck Fairness Act debate that employees already have enough rights and protection in the workplace, overall employee discrimination claims have risen 24 percent in the last decade.

The women of Wal-Mart v. Dukes banded together to fight workplace discrimination and lost. Let’s hope that Congress, banding together, can defeat it.