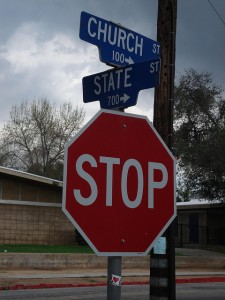 Michigan’s GOP-controlled House passed a bill on Friday, June 15, so that student counselors don’t have to give counseling to gay people, women who have had abortions or anyone else rendered morally unpalatable by their religious beliefs.

HB 5040, or the Julea Ward Freedom of Conscience Act, reads:

A bill to protect the right of a student to assert conscientious objection to providing certain counseling or other services; to prohibit certain actions by institutions of higher education; and to provide remedies.

It goes on to say:

[A higher learning institution] shall not discipline or discriminate against a student in a counseling, social work or psychology program because the student refuses to counsel or serve a client as to goals, outcomes or behaviors that conflict with a sincerely held religious belief of the student, if the student refers the client to a counselor who will provide the counseling or services.

The bill is named after student counselor Julea Ward, who was dismissed from a counseling program at Eastern Michigan University in 2009 after she refused to counsel a gay student, claiming that her religious beliefs meant she couldn’t affirm “immoral persons” to be healthy as the program—and general scientific medical understanding—said she should.

Ward, with the backing of the ever-ready religiously conservative Alliance Defense Fund, sued, charging that the school violated the Constitution by censoring her freedom of religious speech.

She lost the first round in federal court, but later won a ruling with the U.S. Sixth District Court of Appeals, the court saying there was a reasonable chance a jury might have decided the university used its code of ethics as pretext for censoring or punishing Ward’s religious freedom of speech. The Court ordered a retrial in lower court, this time before a jury.

Eastern Michigan University maintains that Ward’s dismissal was in fact not  about religion or homosexuality, but a university’s right to insist that its  trainees complete academic assignments to the standards expected of professional  counselors, something Ward failed to do.

LGBT rights groups suggest that not only is this bill motivated by bias, it could have wider repercussions for all of Michigan’s mental health professionals, with Equality Michigan saying:

House Bill 5040 threatens clients seeking counseling with rejection based on their race, relationship status and faith or, yes, because of their sexual orientation. The “First Do Harm” bill also threatens the accreditation of Michigan universities’ counseling programs, disabling Michigan graduates in their search to find employment, and guarantees that Michigan will not be a top choice for the nation’s best and brightest prospective counseling students.

However, Ward’s representatives from the Alliance Defense Fund are pleased with the legislature’s attempts to enshrine this religious right to discriminate, with Jeremy Tedesco of the ADF saying, “We’re encouraged that the elected representatives of  Michigan have taken a concern in this case and decided to act.”

The legislation, which passed 59-50 in the House, now moves to the Michigan Senate.

Reprinted with permission from Care2