Women in the New Egypt - Ms. Magazine
Skip to content 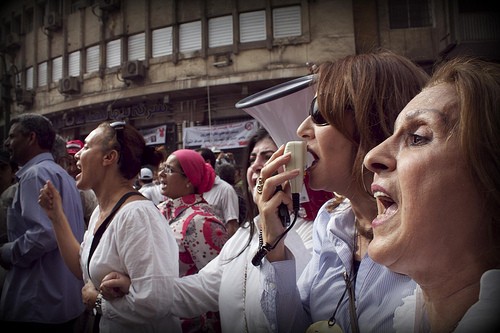 Election day in the rural province of Minia, Upper Egypt. A procession of women in small painted tuk tuks rattle past farmers tilling fields of green sugarcane by the banks of the Nile. Many cradle babies and toddlers in their arms. They also clasp ID cards and slips of paper with their registration numbers, ready to vote. For the first time in Egypt’s history these women are free to elect a president without government interference, but for many, their political choices have been guided by influential men in their lives. Now that Egypt is emerging into democracy, is this set to change?

Although there is a tradition of more educated Egyptian women in urban centers, 58 percent of the population of Egypt live in rural areas and these women have much fewer opportunities to get educated. According to the Egyptian Initiative for Personal Rights, 50 percent of rural female households in Egypt are illiterate. The EIPR also records that only 40 percent of rural women in Upper Egypt have been educated.

“Rural women are much less educated and politically aware than men,” said Amira, a local teacher from the area. “This has made them easier for campaigns to manipulate than men.”

Amira, who is a representative of the women’s council in her village, describes the problems that the lack of education creates. While obviously women have political opinions and make decisions when voting, lack of education can be a barrier to them making an informed choice. “They don’t know which criteria to use, or how to evaluate the impacts of either candidate. Most rural women here have never been asked to take decisions in this way before, so they follow more what others advise them to do.”

The election of an Islamist, the Muslim Brotherhood’s Mohamed Morsi, to the presidency, does not reassure many that this situation will improve.

“We fear that the Muslim Brotherhood do not want to give women a role in political decision making or increase their awareness” says Fathi Farid, program manager of the human rights group ACT. He notes that of the 100- member Assembly appointed by the Islamist-dominated parliament to draft the constitution, only seven members are women. Legislation proposed in the Muslim Brotherhood-dominated Parliament this year has also raised eyebrows. They include proposals to lower the marriage age for girls to 14 and to revoke the “khula law,” which grants a woman the right to ask for a divorce. “We fear that they will not try to empower women and try to marginalize them,” says Farid.

Despite these setbacks, Farid sees that if democracy continues, in the long term women’s rights in Egypt will improve. A girl growing up in Egypt now, as opposed to under a dictatorship, will have seen elections take place. Whoever is president, as elections continue, more and more women will recognize that they have a choice–a choice others don’t have the power to influence. Says Farid,

Once people realize this, women can start opening their mind and choosing for themselves. They will understand that they have rights, which are inalienable, they will have the opportunity to express their opinion.

Whether the future presidents of Egypt decide to support women’s rights or not, they will have to face a more politically aware and confident female population than ever before.

Photo of women in Tahrir Square in April from Flickr user Gigi Ibrahim under Creative Commons 2.0