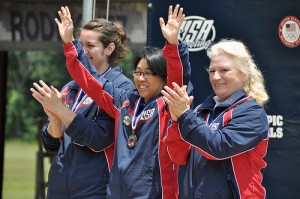 For the first time, the United States will send more women athletes than men to the Olympic Games, which begin on July 27 in London. Of the 530 U.S. Olympians competing at the London 2012 Games, there will be 269 women and 261 men on Team USA, according to the official team roster released by the U.S. Olympic Committee yesterday. As we celebrate the 40th anniversary of Title IX, this is a significant milestone for women in sports.

The women competitors take the title for both oldest and youngest on Team USA, ranging from 54-year-old equestrian rider Karen O’Connor to 15-year-old swimmer Katie Ledecky.

In comparison to countries where women are not taken seriously in the sports arena, or where they are not considered eligible to compete in the Olympic Games—as is currently the with Saudi Arabia, which has not found a women athlete to represent the county—the U.S. is making huge strides in the right direction.