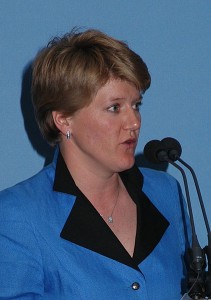 BBC TV sportscaster Clare Balding was probably just trying to come up with a quick answer to a tough question.

In a web chat on the UK blog Mumsnet last Monday, Balding answered questions about her career in sportscasting and how being gay and a woman have influenced her path. She told the web audience she doesn’t consider being a lesbian sportscaster a burden; in fact, she sometimes wonders if being gay makes her better at her job:

I guess I benefit from not having anyone think that I’m commenting about a male tennis player or rugby player for any other reason than their talent on the field of play.

As a respected TV journalist, Balding is a role model for women of all sexual orientations in the UK and abroad. But her casual comments, while not meant to, inadvertently throw women a curve ball: They reveal a persistent, outdated attitude that women sportscasters can’t resist the temptations of ripped athletes. In the ’60s, ’70s and beyond, men used this argument to justify the “no women allowed” rule in press boxes and locker rooms. Lesley Visser and others often faced criticism from men who claimed women sportscasters didn’t actually care about scoring coveted post-game interviews, they just wanted a peepshow.

Women sports reporters eventually broke the locker-room barrier [PDF], giving them equal footing with men in their field, but they still fight for recognition on the basis of their knowledge and ability rather than on looks or sexual attraction. These women are professional journalists and certainly can keep commentary about an athlete to the person’s actions on the field, not how hot they look glistening with sweat (if only men on sports talk radio could be so professional!).

Women such as Hannah Storm, Erin Andrews and Robin Roberts have made great strides in sports broadcasting since then, but Balding’s nonchalant remarks (which she has said were mischaracterized by the media) remind us that a bias remains. And there’s also a danger, in Balding’s case, that her remarks can be spun back against her. When she covers the London 2012 Summer Olympics for BBC later this month, will homophobic or misogynistic critics suggest that she can’t objectively cover women’s events because she’ll be looking at the competitors for reasons other than their talent?

It’s admirable that Balding has been open for the last decade about being a lesbian in sportscasting, and she can possibly inspire others still in the closet to follow her out. Overall, her web chat remarks were instructive, as she lamented society judging women sportscasters on their looks in lieu of their talent, intelligence and wit. We know full well that, like other sportscasters–man, woman, gay, straight–she can separate her job from her libido. But she shouldn’t have opened up women to criticism that they can’t.