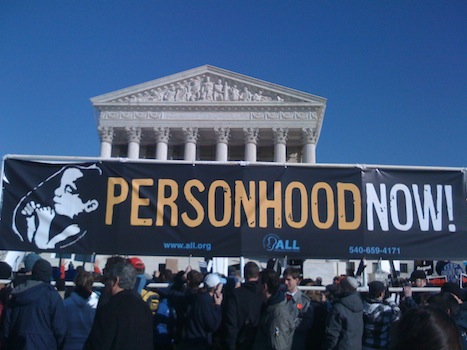 Should an embryo or fetus be granted equal protection under the law and the full rights of persons? Montana voters don’t seem to think so.

Members of Personhood Montana, in conjunction with the Montana ProLife Coalition, scrambled over the last few months to get the requisite 48,674 signatures needed for their statewide petition to put a “personhood” amendment on the ballot for the November election. But as of last Friday, the deadline for the petition to be turned over to state officials, the group received less than half of the signatures need—roughly 23,000—making Montana the latest state to upend a grassroots personhood initiative.

The initiative would have amended the state constitution to define “person” as “all human beings at every stage of biological development, including fertilization or conception.” To the personhood movement, “biological development” begins at conception. If a personhood amendment or law were to ever go into effect, it would eliminate abortion at any stage in the pregnancy, as well as drastically altering access to in vitro fertilization and possibly various types of birth control, including emergency contraception.

Though the push for fetal personhood has strong support among anti-choice extremists, its grassroots initiatives have failed to gain any traction among voters not only in Montana but in states throughout the nation. The only time a personhood measure made its way onto a ballot in the U.S. was in Mississippi last November, where the measure (Prop. 26) was defeated by a 58 percent majority. Most of the time, these personhood initiatives fail during the canvassing process. Earlier this month, a petition in Ohio did not receive enough signatures for ballot consideration, collecting just 30,000 of the 385,000 signatures needed. Personhood Florida fared far worse with its petition, garnering a meager 20,000 of the required 676,811 signatures by its December 2011 deadline; the group gave up on its 2012 ballot dreams, but claims the personhood amendment will be back in 2014.

Numerous bills have also been introduced in state legislatures around the country, but none have passed both chambers. Let’s hope the fertilized-eggs-are-people movement remains too illogical, and too draconian in terms of women’s rights, for American voters to embrace.