They Put Pants on Lara Croft… and Try to Rip Them Off - Ms. Magazine
Skip to content 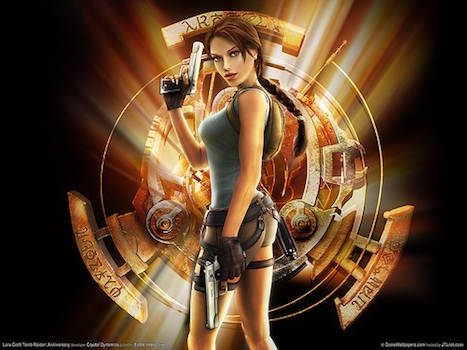 While searching for a feminist presence in the male-dominated sea of “geeks” at the recent 2012 Comic-Con in San Diego, I came upon a panel titled “Re-Imagining a Gaming Icon: Lara Croft.”

In reimagining Tomb Raider, the game designers and writers have given Croft a backstory, a “personality” and, yes, pants! The shorts made famous by the animated character and Angelina Jolie, who played Croft on the big screen, are gone. In their place? Tight cargo pants and combat boots. This will come as a shock to many fans and followers of the game, considering that the short-shorts are the iconic signature of Croft’s ensemble.

In the behind-the-scenes video screened at the beginning of the panel, Luddington affirmed,

The shorts are gone, which I’m sure most guys will think is a bummer, but I like her new look.  Yes, she’s still gorgeous, but now she’s a person.

The character is still ridiculously idealized, boasting exotic Jolie-like features and large breasts, but she is no longer comically sexualized in a midriff tank top and those spandex short-shorts while trudging through the jungle. Croft’s new outfit looks close to something a woman might actually want to wear while surviving on an isolated tropical island (well, maybe…). At the very least, she looks slightly more comfortable. One woman in the audience, clad modestly in a mud-stained shirt and cargo pants equipped with a homemade bow and arrow, was praised by the panelists for dressing up in the updated Lara Croft costume, as opposed to the more dated and skimpy versions that usually flood Comic-Con.

The pants are not the only controversial aspect of the new version of Tomb Raider, however. There have been rumors that Croft is sexually assaulted in the game. As part of her backstory, the designers had to find motivation for Croft to become a tomb-raiding badass. Reportedly, her first kill is the product of protecting herself from sexual assault. The video game’s executive producer, Ron Rosenberg, alluded to the rape scene when telling Kotaku, “She is literally turned into a cornered animal. It is a huge step in her evolution: she’s forced to either fight back or die.”

This is not the only troubling thing Rosenberg said of his iconic character. Here’s another:

When people play Lara, they don’t really project themselves into the character…They’re more like, I want to protect her. There’s this sort of dynamic of ‘I’m going to this adventure with her and trying to protect her…You start to root for her in a way that you might not root for a male character.’

Rather than giving his character the heroic autonomy that (arguably) defined her earlier iterations, he describes Croft as either animalistic or weak, so the person controlling her (typically a man) must protect her. When gamers play games with male protagonists, they aren’t expected to protect their avatar, they’re expected to be the avatar.

In response to Rosenberg’s comments, many fans reacted negatively to the possibility of sexual assault in the video game. Think Progress blogger Alyssa Rosenberg wrote:

Now, clearly there’s an extent to which Tomb Raider’s president Ron Rosenberg mischaracterized his own game by saying that assailants would try to rape Lara Croft. What Lara Croft faces is not a penetrative rape but, from what I understand from people who have seen the walkthrough, a sexualized assault that, if the player lets the scenario play through without acting, results in [Lara Croft’s] brutal murder…[Sexual assault is] a cliché and often ugly way of giving a female character a ‘dark’ backstory or something to ‘overcome,’ and given that Rosenberg suggested that players would be excited to rescue Lara rather than to embody her, a negative fan reaction seems reasonable.

Unfortunately, when asked about this very scene at the panel, the makers of the game shied away from it. They simply said that the content of the scene was blown out of proportion by the media and asked gamers to reserve judgment until actually playing the game. Because the game, Tomb Raider: Turning Point, “will not be released until March 5, 2013,” we will have to wait and see.

If done properly, a sexual assault scene in a video game could be an appropriate element of the story–perhaps even enlightening for male gamers to project themselves into the frightening scenario and have to experience and defend their avatar from sexual assault. But since Rosenberg believes male players cannot project themselves onto a female character, a sexual assault scene in Tomb Raider would be voyeuristic exploitation. I suppose at the end of the day, you win some, you lose some.

You win pants and totally miss the point.

Sexual assault and objectification of women is nothing new in the storylines of comic books and videogames. For a complete list of such instances, see Geekfeminism.com’s wiki page documenting female sexual assault in geek culture, Rape as Back Story.

Don’t Draft Our Daughters—or Our Sons
Our Abortion Stories: ‘He Said if I Got Pregnant, He’d Marry Me. I Got Pregnant. He Left.’
Women Will Be Playing Hardball on TV This Season