The New Misogyny: What it Means for Teachers and Classrooms - Ms. Magazine
Skip to content 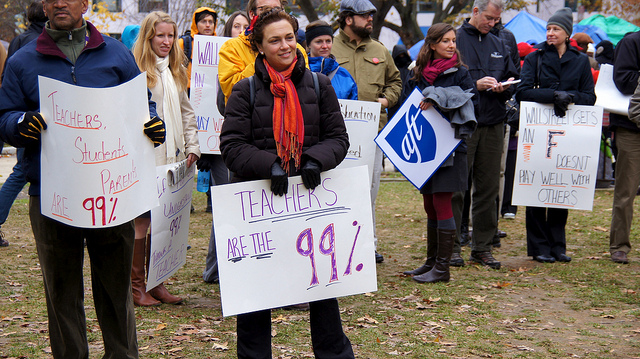 This spring’s political campaigns revealed a deep and ugly wound: misogyny that ranged from Rush Limbaugh’s crass attack on Georgetown Law School student Sandra Fluke to the repeal of Wisconsin’s pay equity law; from the Republican attacks on Title X (which subsidizes cervical and breast cancer screening, testing for HIV and other sexually transmitted diseases and birth control for 5 million low-income women) to Virginia’s mandated external ultrasounds for women who want abortions.

The vilification of K-12 teachers is part and parcel of this misogyny. Last year, when teachers led the occupation of the Wisconsin state capitol, many pointed out the obvious: Attacks on teachers—and other public sector workers such as nurses and social workers—are overwhelmingly attacks on women. When “reformers,” from former D.C. superintendent Michelle Rhee to New Jersey Gov. Chris Christie, portray teachers as incompetent, incapable of leadership and selfish, they don’t need to specify women teachers for that to be the image in people’s minds—76 percent of U.S. teachers are women. At the elementary school level, it’s nearly 90 percent. As education blogger Sabrina Stevens Shupe wrote recently,

The predominantly female teaching profession [is] among the latest [targets] in a long tradition of projecting community/social anxieties onto ‘bad’ women—from ‘witches’ to bad mothers to feminists and beyond.

The decimation of teachers’ unions and tenure structures seems aimed at forcing K-12 teaching back to the era before teaching became a profession, when young women—barely trained and constrained by regulations enforcing their clothing, living situations and drinking—taught for a few years before they got married. Here are some requirements from a typical teachers contract in 1923: The teacher is “not to ride in a carriage or automobile with any man except her brother or father” and “not to dress in bright colors.” She is “to wear at least two petticoats” and “to sweep the classroom floor at least once daily.”

These attacks on women—as teachers, as those with the right to control their own childbearing, as human beings who deserve respect from politicians and the media—are being taken on by unions, political organization, and activists across the country. But one aspect rarely discussed is what this new misogyny means for us in the classroom. As we have seen in other social justice struggles, claiming and passing on the history is integral to fighting for the future. It’s impossible to confront racism, militarism, or environmental degradation without understanding the history. The same is true for the oppression of women. Our students need a critical understanding of women’s lives and struggles in the past to understand and respond to the present.

If you go by most U.S. history texts, the only piece of women’s history worth space in the curriculum is the fight for suffrage. But women defining and fighting for freedom for themselves and their communities has been at the center of American history from the beginning. The everyday lives of women are half the story in every historical moment—as Native Americans forced out of their lands, black mothers enslaved and resisting, white settlers crossing the plains in covered wagons, immigrants at Angel Island and in New York’s Lower East Side.

And, if we move past what Geraldine Clifford named the “add a woman and stir” approach [PDF] to incorporating women into historical study, we can see that a feminist perspective calls into question how history is usually organized: centered on heroes, villains, and wars. For example, the Civil Rights Movement is often narrated as the story of Martin Luther King Jr.’s charismatic leadership of a mass movement. No doubt, any treatment of the Civil Rights Movement that did not discuss King’s work would be incomplete. But a more accurate and more helpful-for-the-future narration might start with the many years of house-by-house organizing by the Women’s Political Council in Montgomery, long before King arrived in that city; and the grassroots, democratic leadership modeled by Ella Baker that was responsible for so much of the success of the movement. As Student Nonviolent Coordinating Committee (SNCC) volunteer and historian Joanne Grant explains, Baker

taught the SNCC students the importance of nurturing local leaders, the value of organizing local groups who would make their own decisions and the vital concept of a group-centered leadership as opposed to a leadership-centered group.

When we relegate these stories to a captioned photo, a colorful “historical highlight” box, or a paragraph at the end of the chapter, we miss an opportunity to tell a richer history, and we disarm our students from understandings they need to navigate a world of militarized masculinity and misogynist femininity.

Take, for example, a controversial piece of history that relates directly to the current political debates: women’s control over reproduction. Birth control, if taught at all in our schools, is usually segregated in health classes. But women’s control over childbearing has actually been a key issue in U.S. history. As the women’s rights movement grew before the Civil War, white middle-class women became interested in controlling how many children they had in order to be able to extend their experiences beyond the home. For black and Native American women, control of their bodies meant primarily the ability to make choices about fertility that weren’t dominated by rape and the inability to keep their children safe and free.

In the early 20th century, when Margaret Sanger first started handing out birth control—a crime for which she was repeatedly arrested—she saw it as part of a larger fight for the emancipation of the poor. But, only a few years later, influenced by the eugenics movement that fueled Jim Crow at home and imperial designs abroad, she was defining the “chief issue of birth control” as “more children from the fit, less from the unfit.” A generation later, many activists fighting for the legalization of abortion ignored the sterilization of black women in the South, Native American women on reservations and colonized women in Puerto Rico.

What a rich, complex historical vein—all the contradictions around gender, class and race that lie at the heart of supporting students to think critically about history and social justice strategies. When we open up history in this way, we encompass gender issues, homophobia and LGBTQ history. Many aspects of current society that don’t show up in the standard curriculum—mass incarceration, poverty and the welfare system, the impact of militarization at home and abroad—are arenas where an exploration from a more feminist perspective can connect to students’ lives and expose them to a more expansive view of what history is and why it matters.

Whatever happens in the next election cycle, the “new misogyny” is a wake-up call. As education activists, we need to expose and confront the misogynist underpinnings of the current attacks on teachers. And, as teachers and teacher educators, we need to center women’s lives and history in our curricula; there is no way to build for the future without it.

Reprinted with permission from Rethinking Schools.

About Editors at Rethinking Schools

Rethinking Schools began as a local effort to address problems such as basal readers, standardized testing, and textbook-dominated curriculum. Since its founding, it has grown into a nationally prominent publisher of educational materials, with subscribers in all 50 states, all 10 Canadian provinces, and many other countries.