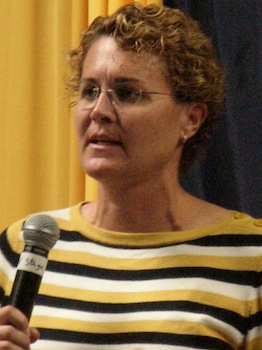 Teri McKeever has long suspected the timing of her vanguard promotion as the first woman coach for the U.S. Olympic women’s swim team in December of 2010 might have been questionned by some. That’s because 2010 marked a sad year in the history of the swimming world–one fraught with sexual abuse scandals involving male coaches assaulting their female athletes, the mysterious firing of 1980-2004 Olympic Swimming and former National Team head coach Mark Schubert and Fran Crippen’s death in an open water championship held in the United Arab Emirates.

“I’d probably be lying if I said there weren’t times where I thought, ‘You better have picked me because you think I’m the right person and not your poster child to clean up the sport,'” McKeever said recently. Her comment harkens back to an earlier statement she made refuting a similar suggestion of tokenism: “I feel confident that my being a female is not the only reason I was selected.”

It’s clear that McKeever wants her accomplishments—rather than her gender—to be the focal point of her coaching at the Games, where U.S. women have won an impressive 13 medals as of Friday. But, as always, gender has a way of sneaking into the reporting on powerful, groundbreaking women. McKeever’s story is no exception.

The lede to a recent article in The New York Times previewing the games cast McKeever’s coaching abilities in essentialist, gendered terms, listing “mediating disputes” and “calming emotions” as bullet points in her unique skillset. The reporter’s questions—which we do not get to see—elicit such responses from McKeever as “I married my job” and “I blew the kid thing,” evidence that women must still answer for veering from a married-with-children path.

Another attempt to force McKeever into a conventional mold is the portrayal of her incredible backstory. After losing her father before the age of six, she was called upon as the eldest child to take charge of her two younger siblings—as well as the next seven kids that arrived after her mother’s second marriage. That kind of forced responsibility came in handy as a coach, a Sports Illustrated story emphasized: “As the oldest, she’s spent half a century being in tune with others’ emotions, reading their cues and coordinating group activities.”

Compare that with a 2008 Baltimore Sun article on Bob Bowman, Michael Phelps’ long-time coach. Bowman’s single status is noted, and the story references his role as a surrogate father to Phelps after the swimmer’s parents divorced. But the article credits Bowman’s success to his education in…wait for it…music–along with his insistence on discipline and toughness. (To be fair, gender seeps into coverage of men’s coaching, too; it’s just that “masculine” traits have been culturally naturalized as being synonymous with good coaching. By that model, the rare tear from Bowman is acceptable, even endearing.)

This is not to say that McKeever didn’t have her own life experiences that contributed to her personal growth and development. But when stories focus on her performing caretaking duties such as washing team gear at the local laundromat, serious (and obvious) double standards influence the reporter’s coverage.

Let’s put any suspicions to rest: Teri McKeever is worth her salt. She’s the woman who put the University of California at Berkeley swim program on the map despite initial doubts from athletes and peers. She’s the one who trained 12-time Olympic medalist Natalie Coughlin; the one who coached 2004 and now 2012 Olympian Dana Vollmer back from a disappointing 2008 Olympic Trials; the one who encouraged Olympian Anthony Erwin to return to the pool after a long hiatus. All of these athletes have confirmed what an extraordinary coach McKeever is and what it means to them that she is their coach.

McKeever’s team ends its triumphant Olympic week today, and she has proved she can handle the praise and the heat. Being the first woman head coach of the U.S. Olympic women’s swim team may have its media challenges, but on the job McKeever has been good as gold.