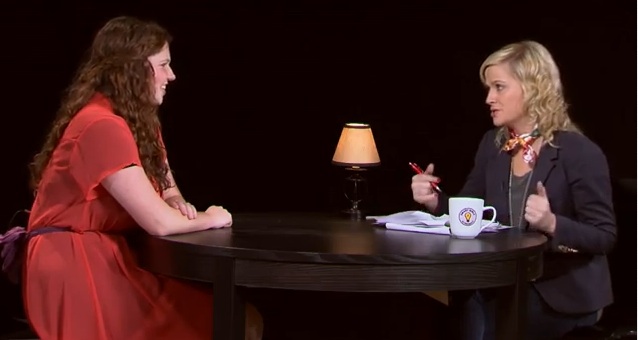 The world of video blogging has evolved to the point where we’re not just getting clips of folks sitting in front of a camera, ranting and raving about a topic close to heart. With relatively inexpensive advances in technology, some video blogs have gone the route of webs series, with polished production values even if they’re just being edited from a home computer. Series such as The Peculiar Kind and Anita Sarkeesian’s Feminist Frequency both exhibit the next step in vlogging–intelligent, articulate and well-crafted videos that can both stand alone or within a series. Many of these feminist-minded web series are about and targeted to women, but one video series focuses on the younger set: Smart Girls At The Party.

Poehler sits down with a different girl in each video–writers, gardeners, dancers, chefs, rockers and even a budding feminist–and takes the time to learn more about them. There’s no pandering or patronizing, and while Poehler may not ask hard-hitting questions, she gives these girls a platform on which to shine. The series is a refreshing alternative to the more mainstream offerings for the “tween” set.

Recently, The Femisphere chatted with one-third of Smart Girls At The Party about the creation of the series, the trio’s plans for its future and how feminist video blogs can find an audience of girls and young women.

Meredith Walker is a television producer but “Smart Girls is my life and my one job.” Mint chocolate chip ice cream—always.
Location: Austin

Ms. Magazine: How did you come up with the idea for Smart Girls At The Party and why? (did you just want to produce something new or did you find something lacking?)

Meredith: Amy P and I were talking about our adolescence and the conversation went further and further. We discussed what made it difficult, what made us feel better and then we talked about what kind of show would have been good for our younger selves.

Why a web series focused/geared toward girls?

Although it’s geared toward young girls, I say this show is for the smart girl in all of us. You don’t lose your turn just because you add years to your life. It’s always your turn to discover yourself and things you want to do. But adolescence is a particularly challenging time of life because your pre-frontal cortex hasn’t fully developed , you start pulling away from parts of yourself and it’s just an extra funky age range. Hearing about the lives of other girls can be an inspiration. If you can find your thing, something that gets you in the flow, you are more likely to survive adolescence in tact.

What do you hope that folks walk away with after watching a Smart Girls At The Party video?

We hope viewers walk away wanting to engage a smart girl conversation, and we hope everyone has a spontaneous dance party.

Where do you see the series going? Do you have anything exciting coming up?

We want this series to go on and on. We do have a new show coming up in September called GIRLS OF THE WORLD, about smart girls everywhere in the world. It’s going to be your new favorite. For shizzle.

Would all three of you involved in Smart Girls At The Party identify as feminist? If so, how does that influence how you come at the series?

OH YES! We are feminists. We hope SGATP viewers want to be more themselves every day. That makes for a kickass person.

Screenshot from Smart Girls At The Party episode 4.