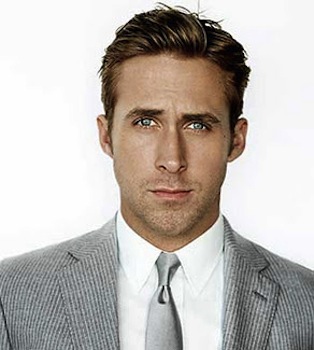 Most students can recall at least one point in their academic careers when they found themselves secluded in a corner of the library, coffee in hand, cramming for a big test.

University of Wisconsin graduate student Danielle Henderson was in a similar situation, struggling to remember and differentiate among numerous feminist theories. So she came up with a plan to help herself out. It all began at lunch one day when Henderson and her friends were talking about Ryan Gosling in the movie Drive.

Henderson was inspired to combine her academic struggles and her feminist lifestyle in a fun way to make difficult feminist subjects and mounting exams easier to tackle. She created a Tumblr account called “Feminist Ryan Gosling” based on “Fuck Yeah! Ryan Gosling“, and what she thought would remain a fun study technique among friends quickly turned into an overnight sensation. Since its creation in October 2011, the Tumblr has garnered more than 3,000,000 views a month. With her wild success rate, Henderson decided to publish a book.

Feminist Ryan Gosling: Feminist Theory as Imagined from Your Favorite Sensitive Movie Dude includes 100+ feminist-themed quips that supposedly come out of Gosling’s mouth. After studying about 35 books during her winter break, she had collected enough feminist theory to write the book. Says Henderson,

They are all legitimately flashcards for me. It still feels really selfish because everything is based on assigned homework and my thesis. … But that doesn’t mean it’s all right. I put my opinion into what I read. 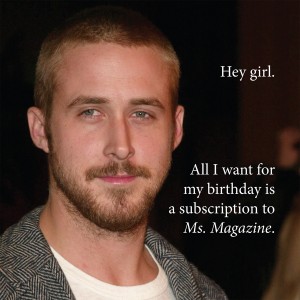 Henderson admits that she is still surprised by the success of the site. She explained that if she had known it would get so popular, she probably wouldn’t have chosen to feature someone as famous as Ryan Gosling:

All I hope is that he doesn’t completely hate it. My goal is not to out him as a feminist or put words in his mouth. … It’s just something I like to do.

Imagining Ryan Gosling talking about feminist theory is a creative way to engage and inform about sometimes hard-to-grasp topics. While it is not clear if real-life Gosling is a feminist, Henderson skilfully pairs feminist comments and Gosling’s expression in complementary settings to make each “Hey girl…” seem surprisingly realistic. Although Gosling has not commented on the Tumblr or upcoming book, he was quoted in 2010 discussing Blue Valentine’s NC-17 rating. The problems he addressed definitely support the imaginary feminist Ryan Gosling:

You have to question a cinematic culture which preaches artistic expression, and yet would support a decision that is clearly a product of a patriarchy-dominant society, which tries to control how  women are depicted on screen. The MPAA is OK supporting scenes that  portray women in scenarios of sexual torture and violence for entertainment purposes, but they are trying to force us to look away  from a scene that shows a woman in a sexual scenario which is both complicit and complex. It’s misogynistic in nature to try and control a woman’s sexual presentation of self. I consider this an issue that is bigger than this film. 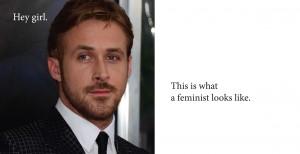 While many continue hoping that Gosling will officially call himself a feminist, for now, we can continue to be entertained by Henderson’s book. Its goal is to allow feminism to be fun and personal, says Henderson:

I’ve spent so much time as feminist feeling really alone and isolated. It’s cool that people are interested in talking about feminist in a different way. We can address difficult things in a more lighthearted way, while still being part of struggle and sisterhood.