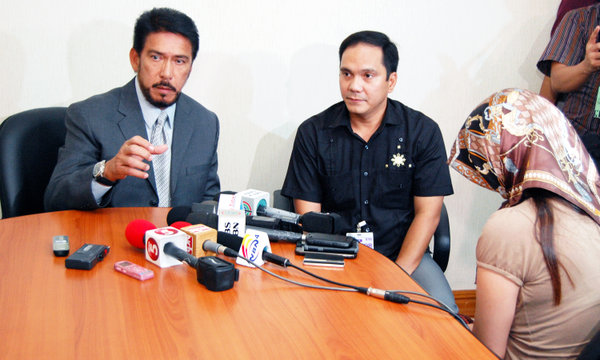 For decades, Filipina women have fought for the right to control their own bodies, from contraception access to abortion rights. And now they are closer than ever to achieving that goal—but it is turning into a raging political battle that leaves countless women’s lives hanging in the balance.

I am not Filipina. I am a white American blogger and small business owner in New York City. So you can imagine my surprise when a two-year-old blog post of mine suddenly made it to the floor of the Philippine Senate last month. According to the Filipino reporters who alerted me to this, Sen. Vicente “Tito” Sotto III lifted entire passages from a post I wrote for Feminists For Choice and twisted them into an anti-choice argument against an important reproductive rights bill in the country.

The bill in question, the Responsible Parenthood, Reproductive Health and Population and Development Act (commonly referred to as the Reproductive Health Bill, has been lingering in Congress for 14 years. It directs the country’s health department to make available “medically safe, legal, accessible, affordable and effective reproductive health care services nationwide.” It also includes a provision mandating “age-appropriate reproductive health and sexuality education” from the fifth grade through high school.

Sotto has gone to great lengths to argue against the bill, presenting questionable content as medical facts, such as railing against oral contraceptives as being potentially deadly and claiming condoms have a low efficacy rate. The piece that Sotto plagiarizes discusses Indian nationalist leader Mohandas Gandhi’s little-known sexism, and though he misconstrues my argument it’s ironic that he chose this particular piece, as it aptly reflects his own hypocrisy as a political leader.

My blog post, titled “Gandhi’s birth control of choice,” discusses the relationship between Margaret Sanger and Gandhi, and his views on birth control. Sanger had, at one point, made a considerable effort to gain Gandhi as an ally in her mission to spread the use of oral contraceptives worldwide. But he refused the partnership, encouraging his followers to practice self-restraint instead of using contraceptives.

I took the piece a step further, presenting a full overview of Gandhi’s exploitation of women. In the later years of his life, he slept nude with young, attractive women (including his 18-year-old grandniece) as part of the practice of brahmacharya, or complete control over the senses. Gandhi meant to show those around him that not only was he able to restrain himself sexually, but that others could do the same.

While I have a lot of respect for Gandhi as a civil rights leader, I am highly disturbed by this aspect of his life.

Given the content of my post and my very pro-contraception position, I could hardly understand how my words could be used to argue against reproductive rights. But lo and behold, it turns out that entire segments of my post were used by Sotto, albeit put into an anti-choice context. What’s more, he has oddly used the words of several other bloggers, writers and case studies in his speeches.

I would love nothing more than to see this bill passed, and am angry that my work would be used to stall its advancement. It is my hope that Sotto will apologize to each of the bloggers he has plagiarized, and that this story might actually serve to increase the exposure of the Reproductive Health Bill.

Currently, a vote on the Reproductive Health Bill has to yet take place in the Philippine Senate and House of Representatives. Advocates of the bill are pushing for a vote before the year’s end, and some senators say that, despite the anti-choice sentiments of Sotto and Senate President Juan Ponce Enrile, the bill has enough support in the legislature to be passed.

Photo of Filipino Sen. Tito Sotto from his official website.