At the Risk of Sounding Angry: On Melissa Harris-Perry’s Eloquent Rage - Ms. Magazine
Skip to content 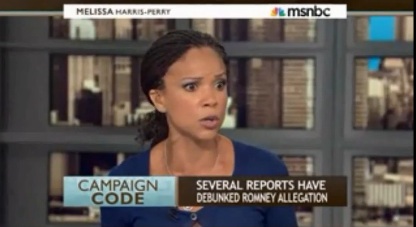 The Internets were all abuzz over the weekend sharing clips of our collective Black feminist shero Melissa Harris-Perry’s Saturday morning show. During the show, she lost her cool with panelist Monica Mehta, a conservative financial expert, when Mehta brought up risk-taking by entrepreneurs. (“What is riskier than being poor?” asked Harris-Perry, her voice rising.)

After I posted the clip to my Facebook page, a former student of mine simply commented that this was an example of “eloquent rage.” She knew I would get the reference, because the first time she ever used it was in reference to me and my impassioned style of teaching students about the politics of race, class, and gender. My first reaction to being characterized in this way was denial. “I’m not angry,” I told her. “I’m passionate.” And then she looked at me with a knowing honesty and said simply, “You know you’re angry, Brittney.”

It was one of the most transformative moments in my teaching because I realized a) that it was anger and not merely passion; b) that I was bringing it with me into the classroom; c) that I had a right to be angry about the injustices that I teach about and live daily and d) I could resist and deny my anger or use it to make me better at what I do. I chose the latter.

When I watched Harris-Perry lose it, oh so beautifully, passionately, eloquently and truthfully for the brief moment that she did, I experienced deep and profound knowing, the knowing that comes from the frustration of having to listen to people talk sideways to you about shit that is merely theoretical for them, all the while you know that the attitudes they hold are especially detrimental to people who look like you.

It is even more infuriating when people of color espouse such bullshit. I know that all Black and Brown folk don’t think alike. I also know that when folk of color align themselves with the Republican Party, that alignment is often deeply tied to a deep disdain and disavowal for what they perceive to be a narrative of Black victimhood that makes one beholden to social entitlements (welfare). I know Black and other non-white folks who’ve made their life paths about distancing themselves from such a narrative. There is also a liberal version, and that version is a Toure’-style “post-Blackness” “post-race” blah. But to believe in any of it is to remain in deep denial about the way that white supremacy structures our society.

This denial allows people to see MHP’s expression of anger as over the top and out of order and miss the fact that Clint Eastwood’s “performance” at the Republican convention last week was nothing if not a classic white male racial temper tantrum.

It also allowed Monica Mehta’s persistent use of racial microaggressions towards Black people to come off as earnest commentary, while Melissa’s emotional reaction was perceived as disproportionate to the slight. There is also a racialized gender dynamic at play as well, in which white women and non-Black women who are frequently exoticized can use the hyperfemininity ascribed to their bodies as a shield behind which they get to say the most racially problematic shit and have it remain unrecognized as aggressive and offensive.

I applaud MHP for her show of eloquent rage. It was honest, and it is so necessary in this moment of massive political dishonesty. Moreover, in light of the destruction caused by Hurricane Isaac and the personal impact that it had on MHP’s family, her stress was completely understandable.

Even when she apologized for losing it, I’m glad that she took off the Strong Black Woman mask and said, in effect, I’m stressed, my family just lived through another Hurricane on the anniversary of Hurricane Katrina, and even though I have this fancy job and resources at my disposal, all is not well. In other words, she wasn’t just showing anger. She was showing pain. The kind of pain that Black women are frequently not allowed to publicly  acknowledge is actually happening in our own lives.

One of the ways White supremacy and sexism works is through a putative disavowal of emotion as a legitimate form for expressing thought. Women and Black people are overly emotional, so the conventional wisdom goes. We have been taught to overcompensate for this stereotype by being overly composed, even when anger is warranted. And we are wholly unprepared when our emotions start to split the seams of our tightly put on public selves. Perhaps it’s time to change clothes and intentionally put on something that gives us room to breathe.

For me, that has meant embracing my own crunkness. Why go off when I can GET CRUNK? And by that I mean I can make an  intentional choice to use my legitimate and righteous anger in an honest and compassionate way that is potentially transformative.

I, for one, am thankful for MHP’s voice and her courage, and yep, you guessed it–her CRUNKNESS.

Cross-posted with permission from The Crunk Feminist Collective.

Brittney Cooper is co-founder along with Dr. Susana Morris of the Crunk Feminist Collective, a feminist of color scholar-activist group that runs a highly successful blog. Three members of the CFC were recently profiled in Essence Magazine’s list of Young, Black, and Amazing women under age 35 (August 2012 issue). The CFC blog was also named as one of the top 25 Black blogs to watch in 2012 by The Root.com and one of the top “Lady Blogs” by New York Magazine in November 2011. The Collective also does speaking tours, conducts workshops, and engages in a range of activist causes related to women’s issues. Professor Cooper blogs for the CFC as “Crunktastic.” She has also contributed to Ms. in both print and online.