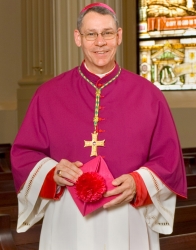 Bishop Robert W. Finn of the diocese of Kansas City-St. Joseph (Missouri) was convicted Thursday of failing to report suspicions of child abuse that took place within his diocese. He is the highest-ranking American cleric to be convicted of a child abuse crime in the Catholic Church.

However, he was sentenced to just two years of probation. “Only jail time would have made a real difference here and deterred future horrific cover-ups; anything less will not produce any meaningful reform,” said Barbara Dorris of SNAP (Survivors Network of Those Abused by Priests).

The bishop was convicted of one count of failing to alert authorities that one his priests, Rev. Shawn Ratigan, had hundreds of pornographic photos of children on his computer. The photos were of children in the diocese, taken by Father Ratigan with his personal digital camera. According to the indictment, the disturbing collection included “a child’s naked vagina, up-skirt images and images focused on the crotch.”

The photos were discovered in December 2010 by a computer technician hired to repair Father Ratigan’s laptop. The technician, Ken Kes, was startled by several lewd photos, particularly one of a naked toddler. Kes returned the laptop to diocese staff member Julie Creech, who uncovered hundreds more. The next day, Father Ratigan attempted suicide but survived, and was later sent to a psychiatrist in Pennsylvania. According to Bishop Finn, the psychiatrist said that Father Ratigan was not a risk to children.

As Creech and another staff member pushed for Father Ratigan’s resignation, the priest was sent to serve as a chaplain in Independence, Mo. Then, Bishop Finn placed several restrictions on him, including limited access to computers, cameras and children. Father Ratigan, however, continued to have contact with children and teenagers, whether through celebrating youth group masses or Easter egg hunts. When invited to the home of a family of parishioners, Father Ratigan was caught taking pictures of the young daughter’s crotch under the table during dinner.

The diocese’s second-in-command, Monsignor Robert Murphy, who also knew about the photos since December 2010, never contacted authorities until May 2011—more than five months after the photos were discovered. Father Ratigan was then arrested for possession of child pornography and pleaded guilty to five counts of producing or attempting to produce child pornography in August. He faces 15 to 30 years in prison for each of the counts.

According to his testimony in court, Bishop Finn delayed contacting authorities in order to “save Father Ratigan’s priesthood.”

Before Finn’s conviction, Monsignor William Lynn of the Archdiocese of Philadelphia was the highest-ranking Catholic official implicated in the child abuse scandals that have rocked the church for the past decade. He was convicted in July of child endangerment for covering up child molestations by numerous priests, then transferring the predatory priests to other parishes.

Will the buck stop with Lynn and Finn? SNAP hopes not: It filed suit a year ago with the Center for Constitutional Rights asking the International Criminal Court to hold the Pope and Vatican officials accountable for sexual abuse by priests.