If Only Mexico Had a Woman President - Ms. Magazine
Skip to content 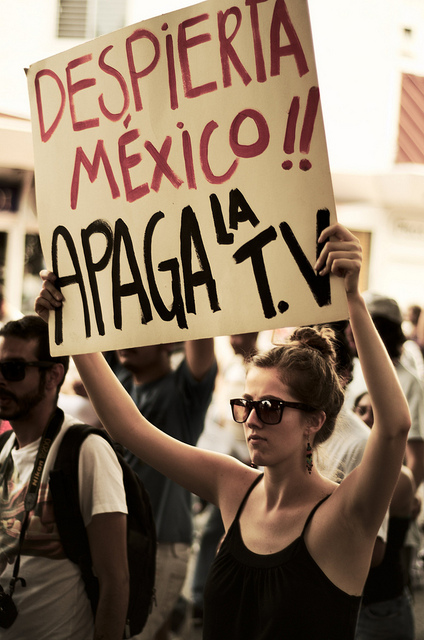 Imagine the possibilities of a woman president in Mexico. Femicides, reproductive rights, poverty and frightful working conditions–all are issues that Mexican women face today, and feminists would like to imagine that a woman president might take them more seriously than a man would.

And Mexico could have had its first woman president if the recent vote there had gone differently. Josefina Vázquez Mota of the National Action Party (PAN)— the first woman from a major party to be nominated for president in Mexico—came in third according to Aug. 31 election results, with Enrique Peña Nieto from the Institutional Revolutionary Party (PRI) winning with 42.7 percent of the vote.

“Vázquez Mota’s agenda included addressing gender violence, but stuck to her party’s conservative agenda regarding reproductive rights,” says Blanca Rico, executive director of Semillas, a fund for Mexican women’s organizations. “Feminists did not vote for either party [the PRI has a history of corruption and heavy authoritarian practices]–instead they voted for Andres Manuel Lopez Obrador of the Democratic Revolutionary Party (PRD).”

Twelve years ago, women voted for PAN’s candidate Vicente Fox, marking the end of the 71-year rule of the PRI. Fox promised the inclusion of women in a diverse government, increasing access to jobs and education, ending sex discrimination, addressing domestic violence and attending to women’s health issues. Indeed, during the PAN administration, Mexico City was the first city in the country to legalize abortion, in 2007.

But, simultaneously, there was large support from both PAN and PRI to “protect life from conception,” and more than half of Mexico’s states modified their abortion laws to fit this model, says María Luisa Sánchez Fuentes, a board member of GIRE, an NGO that promotes and defends reproductive rights for women. A shadow report presented in July to the Committee on the Elimination of Discrimination against Women (CEDAW) by various NGOs indicated a lack of access to reproductive health services in Mexico, as well as a high rate of maternal mortality. In 2008, the country’s maternal mortality ratio was 85 deaths per 100,000 births (according to estimates of the World Health Organization and others), and the government predicts that Mexico will not reach the 2015 Millennium Development Goal of reducing maternal mortality by three-quarters.

Furthermore, femicides in the border city of Ciudad Juárez and other Mexican states continue to steadily increase since 2007; currently, Mexico ranks 16th in the world in violence against women. The Mexican government even adapted a Gender Alert to address and eradicate femicides in a given territory, but it’s only been activated four times in the last five years.

So what does this new “modernized PRI” that takes office in December mean for Mexican women? “Peña Nieto has little authenticity for being president” says Sánchez Fuentes. As former governor of the state of Mexico, he failed to enact the Gender Alert, despite the state having one of the highest femicide rates in the country. During his term, roughly 1,000 slayings of women were identified; about half went unresolved. In 2011, an average of two women per day went missing in Mexico.

But women’s issues fade into the background as overall violence connected to drug trafficking dominates Mexico’s concerns. “As the violence in Mexico continues, and with [the new president’s] close ties to the Catholic Church, it is difficult to address the issue of reproductive rights,” says Sánchez Fuentes.

“The PRI is going to continue with its same economic politics, the growing separation between the rich and the poor,” Rico adds.

Though there is not a large wage gap between the genders, Mexican women do earn less than men and tend to be the most impoverished: about 49 percent of Mexico’s rural women and 14 percent of women in urban areas live below the poverty line. Work and class mobility is also more difficult for women, and the male-female ratio in high-ranking positions remains lopsided. Already, Peña Nieto has appointed 39 men and just seven women as his presidential advisers.

Mexican feminists, however, are still holding out for a leader that will make women’s rights and their livelihoods a priority—even if it means pressuring the government until women’s issues become more visible. Numerous protests have already sprouted throughout the country, and women are currently mobilizing for nationwide rallies expected to take place on Mexico’s Independence Day this weekend.

“There has been a large movement and protest against Pena Nieto, claiming that he was imposed by the two largest television station by marketing his image and buying votes,” says Rico. “This [the protests] can open a new window that can lead to a more progressive agenda.”