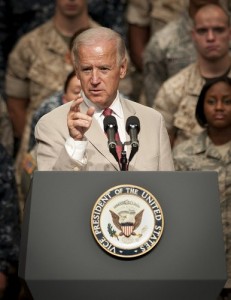 While a senator, Joe Biden was instrumental in the passage of the Violence Against Women Act (VAWA), which is up for reauthorization in Congress. The Senate has passed the bill, but the House passed a version characterized as “VAWA Lite” because it removes Senate-approved provisions addressing safety on campuses and protections for LGBT, immigrant and Native American survivors of violence. The two bills need to be reconciled in order for VAWA’s reauthorization to become law.

Here’s what the now-vice president said about VAWA on the anniversary of its signing by Bill Clinton, September 13, 1994:

Eighteen years ago today, the landmark Violence Against Women Act (VAWA) was signed into law. It was founded on the basic premise that every woman deserves to be safe from violence, and since its passage we have made tremendous strides towards achieving that goal. We gave law enforcement and the courts more tools to combat domestic violence and hold offenders accountable. We created a national hotline to direct victims to life-saving assistance. And since VAWA passed, annual rates of domestic violence have dropped by more than 60 percent.

But we still have much work to do. Three women still die every day as a result of domestic violence. One in five women have been raped, many as teenagers, and one in six women have been victims of stalking. While women and girls face these devastating realities every day, reauthorization of a strengthened VAWA languishes in Congress. VAWA is just as important today as it was when it first became law, and I urge Congress to keep the promise we made to our daughters and our granddaughters on that day—that we would work together to keep them safe.