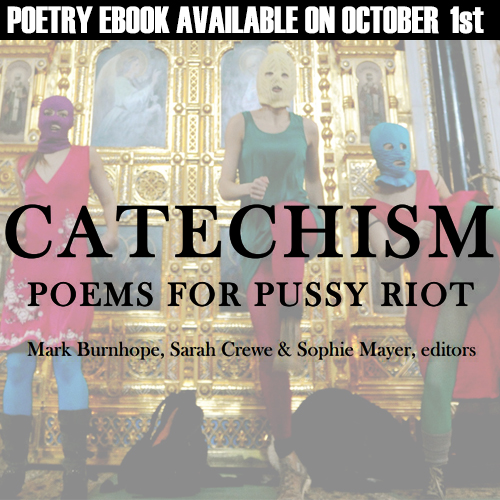 “What do you care?” asked a friend of a friend on Facebook. Or, as a BBC Radio 4 reporter asked me a little more eloquently, “Why are you protesting on behalf of Pussy Riot?”

I have to admit that compared to my Facebook comment response, my answer for Radio 4 was a little more genteel. (They’re the UK’s version of NPR, after all.)

Oh so many answers to that one. I’m a feminist artist supporting feminist artists. The disproportionate punishment, the astoundingly bureaucratic courtroom proceedings and the intertwining of church and state to the detriment of women that Pussy Riot were commenting on in the first place, all moved me to speak out, to march with a balaclava on my face and chant in Leeds city center the day before their sentencing.

Today, 1 October, is the day scheduled for Pussy Riot’s appeal (which has now been postponed). Opinion is divided on what outcomes can be expected, or whether Putin will allow himself to appear to be swayed by international pressure.

A global day of action to mark the appeal has been supported by groups and individuals around the world, from Amnesty International to college feminist groups.

In England, attention will be focused on a peaceful protest outside the Russian Embassy: a gathering of poets reading outside.

They’ll be reading from Catechism: Poems for Pussy Riot, a digital anthology of 110 poems edited by Mark Burnhope, Sarah Crewe and Sophie Mayer in absolutely record time. They’ve put it out through English PEN, the founding chapter of PEN International, which is a group that advocates for freedom of expression on behalf of writers around the world.

Full disclosure: I contributed a poem and a stencil, and my inside view of the precision and speed with which these editors worked was breathtaking. It all happened over Facebook, email, Twitter and text messages after the initial call went up on the website. No bureaucracy, no payment, just feminist artists speaking out on behalf of other feminist artists.

With revisions and proofs turned around in a day, translations into Russian and hourly updates, it built up momentum which I hope will continue through the appeal, or provide solidarity, should this particular example of injustice continue.

Chella Quint is a comedy writer, performer and old school zine girl from Brooklyn who now lives in Sheffield, England. She is most well known for Adventures in Menstruating, a print zine, blog and live comedy show that deconstruct feminine hygiene advertising with wit, irony and brute force. Her comic essay, "Getting Civilized," appears in Here Come the Brides: Reflections on Lesbian Love and Marriage (Seal Press, March 2012), and you can find out about her current projects at http://chellaquint.wordpress.com.