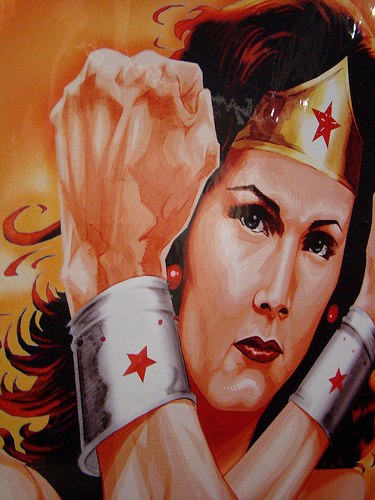 As the Fall issue of Ms. magazine hits newsstands today, with Wonder Woman on the cover, we’re thrilled to hear from a real-life Wonder Woman–actor Lynda Carter, who memorably played the role of the superhero on TV from 1975-1979. Here’s what she has to say:

When I started out playing Wonder Woman on TV, practically everyone behind the camera was a man–and men were the acting leads in almost all series programming, too. Today, women have broken through: as studio and network executives, producers, directors, writers,  stage managers, sound engineers and camera operators–to say nothing of the large number of shows with female leads. That fundamental social and economic shift is due in no small part to those at Ms. magazine, and the many elsewhere (including men) who fought tirelessly for equal opportunities for all. Seeing Wonder Woman raise hell on the cover of Ms. is as fitting now as it was 40 years ago: We may have come a long way, baby, but our fight for equality in the workplace is far from over.

Wonder Woman has symbolized empowered women breaking through barriers. I am proud to have played a role that may have helped in a small way inspire others on this exciting path to equality.

We feel sure that Wonder Woman would also like you to know this: If you join the Ms. community today (or renew your membership), you’ll not only get four issues of the magazine sent to your door, but as a premium you’ll get a commemorative, wall-worthy, 18″ x 24″ poster of the new Wonder Woman cover! Express your feminist superpower by being part of Ms.!

Image of Lynda Carter as Wonder Woman from Flickr user istolethetv  under license from Creative Commons 2.0