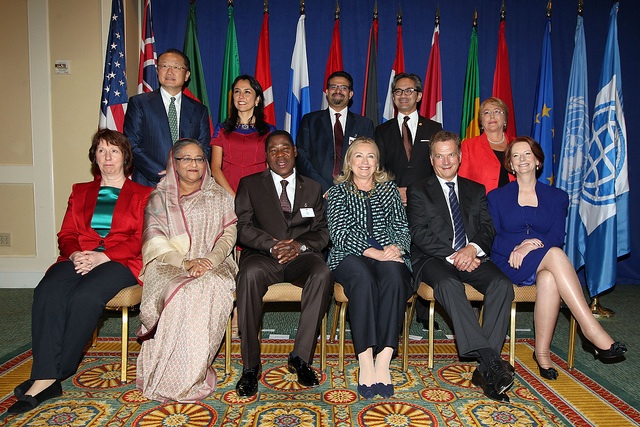 One year ago, President Obama addressed the United Nations General Assembly after the U.S. signed a declaration ensuring women’s political and economic empowerment. The president has already made serious headway toward the goals of this declaration by issuing an executive order in August that promised to better respond to violence against women globally by creating an interagency task force.

Hillary Clinton took further steps in this global path for women last week by launching the Equal Futures Partnership with support from 12 founding nations. The groundbreaking global initiative aims for women to be more instrumental in pushing their nations forward. Speaking out at a New York launch event this week, the Secretary of State said,

There’s really no limit to what our imaginations can devise as to what we can do in supporting the Equal Futures Partnership. We know that there is economic data, health and social science data that demonstrates clearly now is the time, and investing in women and girls is a smart strategy.

The U.S. will continue building on their existing efforts that include promoting greater women’s representation in STEM fields, providing domestic abuse survivors with financial empowerment and expanding entrepreneurship programs for women innovators. They plan to accomplish this with support from private sector collaborators such as Goldman Sachs and Intel.

Some of the more notable aspirations of the Equal Futures Partnership that have been expressed by the participating countries include:

Bangladesh: Will develop a National Action Plan to achieve a 50-percent women workforce by 2021 at the district and village level.

Peru: Will implement a quota system for women political candidates so they have more opportunities for leadership.

Tunisia: Plans to renew focus on a national strategy to combat domestic violence.

It is encouraging to see two nations from the Middle East, Jordan and Tunisia, participating in this partnership. Also heartening is the fact that some nations are building on previous accomplishments. For example, Senegal seeks to increase the percentage of women in its parliament, who already comprise an impressive 45 percent. The World Bank will take responsibility for tracking gains made from the partnership, and analyze which strategies are most implementable.

From an economic and political standpoint, empowering women and girls is good business. Nations will never reach their full potential if half of their populations are underutilized or ignored. With the opportunities to run for office or start a business that the Equal Futures Partnership could garner, women could help to ensure that the countries involved aren’t just democracies in name only.

Secretary of State Clinton has said that making women equal partners was “one of the great pieces of unfinished business of the 21st century.” With this forward-thinking partnership, the globe will be watching a bevy of influential nations take a leap towards real progress for women.

Let’s hope in April 2013, when the participating nations meet again at the World Bank’s Washington, D.C.,headquarters, that they paid more than lip service to the global initiative.

Photo at top from Flickr user EEAS under Creative Commons 2.0.