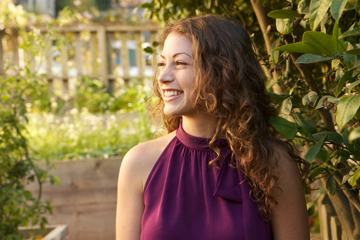 If Goldie Blox is locked in a cell in the top room of a tower guarded by evil monsters and fire-breathing dragons, she doesn’t wait for a prince to ride in and rescue her, winning her heart in the process. Oh no.

Instead, she builds her way out. Using whatever objects she can find, she invents a system that rips the bars off of the window, distracting the menacing creatures below. Next, using string and a block of wood, she quickly devises a makeshift elevator and lowers herself to safety.

Though she hopes that no one finds herself in such a situation, Goldie wants to inspire all young girls to have the skills and desire to solve problems using basic engineering concepts, like she does. GoldieBlox, the brainchild of Stanford engineer Debbie Sterling (above), is a construction toy and book series featuring Goldie, a young inventor who builds her way to solutions. As girls read Goldie’s story, they get to build what she builds, using the project set accompanying the book, which features real-life engineering basics such as wheels, axles, blocks, washers, a crank and a pegboard. Sterling created GoldieBlox to foster in girls an interest in engineering at an early age. As she writes on her project’s Kickstarter site,

The scary truth is that only 11 percent of engineers are women, and girls start losing an interest in science as young as age eight! This is our chance to change that statistic.

Because she had little exposure to engineering concepts as a child, Sterling can relate to the way many young girls feel about engineering today. She confesses on the Kickstarter page:

When I was a little girl, I thought the word ‘engineering’ was nerdy and intimidating and was just for boys. I’ve since learned I was so wrong.

In an email interview with the Ms. Blog, she writes that she first heard the word “engineering” from a high school math teacher and signed up for Mechanical Engineering 101 upon arriving at Stanford. She recalls,

We were given group assignments like: ‘Build a catapult using a piece of foam core, five rubber bands, a soda bottle and a piece of string. I’d always loved building and inventing things growing up, so this was the perfect class for me. I instantly declared engineering as my major.

As she progressed through her coursework, however, Sterling admits to experiencing significant challenges as one of only a handful of young women pursuing an engineering degree. “I often felt like my ideas were overlooked in group projects with male peers. Most of my professors were male. I had very few role models,” she writes.

Sterling’s initial experience with engineering is far too common for girls and women, and can dissuade them from entering the male-dominated STEM fields. But using GoldieBlox as a medium, she’s determined to put out a new message. To create a product specifically designed to appeal to girls, she says she spent a year researching gender differences and child development.

“The research I read indicated that boys outperformed girls in a spatial skills test by Vandenberg and Kuse in the ’70s, while other research I read suggested girls have an advantage in verbal skills,” she writes. She later clarifies that these respective advantages are not necessarily biological: “I think the gender differences around spatial skills development in particular are dramatically overestimated, and that the main issue is nurture, not nature.”

She also found that people who performed better on spatial skills tests had played with construction toys or participated in sports at a young age, and that spatial skills can be learned with practice. Thus, the concept of a toy-and-book combination was born.

After coming up with an idea around which to develop GoldieBlox, Sterling’s next step was to create a template she thought would be attractive to girls. She stresses that it was important to go beyond just “making it pink,” and decided to have a wider color palette but feature soft textures and curved edges.

I chose the soft textures because I read that girls innately prefer them. There is a study on male and female primates who were given a bunch of children’s toys. The male primates selected the hard objects and the female primates chose the soft ones and petted them. After conducting my own research with children and observing them, I noticed the same trend. The girls would pick up the softer objects. I had metal pieces in one iteration of the prototype and hardly any of the girls wanted to touch them.

Colorwise, she still had to be “pretty overt about this being a girls’ toy; after all, most parents just aren’t buying the gender-neutral construction toys for their girls yet. One basic way to do that [indicate it’s a toy aimed primarily at girls] was through color.” Still, Sterling took care to choose colors that attract boys, too. “The main brand color is a marigold yellow and the secondary colors are sky blue, persimmon, periwinkle, mint green and rouge. … I’ve found in my research that these colors actually appeal to both genders.”

In a world where toys for young girls are almost exclusively pastel pink and purple (not to mention feature princesses and domesticity rather than critical thinking), GoldieBlox reflects a refreshing trend in the toy industry that will hopefully grow. Sterling certainly has shown early success with her brain-enhancing creation: Her company reached its Kickstarter goal of $150,000 in just five days, and now the GoldieBlox company is going into production and has begun working on two subsequent book-and-toy sets.

Sterling’s very personal connection with, and devotion to, the project seems no small part of its appeal. She writes,

Getting my engineering diploma from Stanford was a moment of triumph, and hearing Steve Jobs’ speech at my commencement inspired me to take that degree out into the world and find my passion. And here I am, I’ve found it in GoldieBlox and I’m passing it along to as many girls as I can.

Both photos courtesy of the GoldieBlox Company by Susan Burdick Photography.

War on Women Report: Republicans Propose 150 Anti-Trans Bills; Idaho Republican Says Women Are Like Cows; Trump Glosses Over His Role in the End of Roe
The ERA Has Been Ratified, Declares New Congressional Resolution
Violence Against Jacinda Ardern and Other Women Political Leaders Is an Attack on Democracy Itself