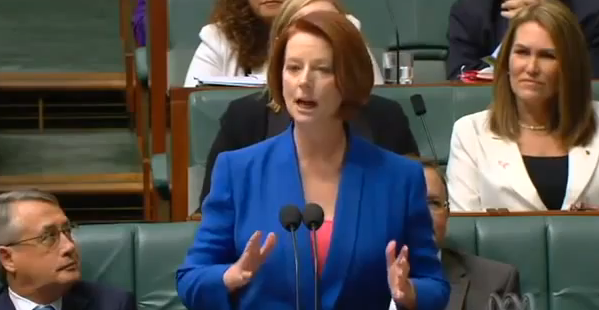 If you didn’t know or even care who the prime minister of Australia was, you should now. Yesterday, Australia’s first woman prime minister Julia Gillard decided it was time to take the gloves off and deliver an oratorical one-two to opposition leader Tony Abbott.

In a masterful takedown before the country’s parliament and in front of Abbott himself, she went on an indicting rant, exposing every sexist remark or action the politician has openly made.

This comes on the heels of a recent scandal in which Australia’s speaker of the house, Peter Slipper, allegedly sexually harassed a gay staff member. Abbott said that if Gillard defended Slipper, who was pressured to resign, she would be just as sexist as the speaker.

Gillard, who has endured a barrage of belittling and misogynist comments from Abbott since she took office, had enough and called him out for his “peddling of a double standard.”

She enumerated a litany of his derogatory moves, including him standing next to a sign that described her as a “man’s bitch” and an insinuation that she lacked virtue in cohabitating with her partner.

Her speech against Abbott hit a particularly high note when she said, “If he wants to know what misogyny looks like in modern Australia he doesn’t need a motion in the House of Representatives, he needs a mirror.”

Her blistering words were a brilliant show of political feminism and effectively wiped the smirk off the opposition leader’s face, who appeared quite uneasy by the end of her speech.

Looks like we should start calling Gillard a bus driver–because she just took Abbott to school!

There is one thing we have to admit we don’t heart about Gillard, however: She’s a staunch opponent of same-sex marriage. Hopefully, she’ll come to realize that same-sex marriage is as much of a feminist issue as the misogyny she decries about Abbott.