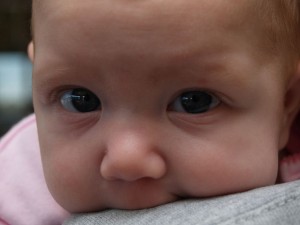 Such as when Adrienne Pine, an assistant professor of anthropology at American University, brought her infant to the first day of her “Sex, Gender, and Culture” class in late August. That morning her daughter had woken up with a fever, barring her from daycare, and Pine made a split-second decision to either cancel class, which she was loathe to do, or bring the baby along to work.

During class time the baby crawled about on the floor, and when she seemed hungry Pine simply put her on her breast for a quick fill-up. Then the baby drifted off to sleep and Pine carried on her lesson plan.

Somewhere mid-class, a student tweeted that Pine had just breastfed the baby, setting off a chain reaction that Pine sought to quell by dismissing a reporter from the school newspaper who subsequently contacted her. Within the space of days, exactly what Pine hoped to defuse began to roller coaster forward with a momentum of its own.  The Washington Post ran a front-page article tracking reaction to the “appropriateness” of breastfeeding in a classroom; The New York Times posted a commentary and various other media sources debated the rightness and wrongness of her actions. The discomfiture with breastfeeding in American culture became enmired in issues of female workers’ rights, professional comportment within academe, the plight of single parents and the availability of childcare.  The personal became highly political, despite Pine’s reluctance to view her act as anything but a one-time emergency measure which prioritized her teaching duties while still caring for her child.

Within the online and print melee that ensued,discussion diverged around which of Pine’s missteps was most grievous. Because her child was sick, some thought she was negligent simply for bringing the baby into a classroom–both by exposing her students and also possibly worsening the baby’s illness. Then there were those who felt that babies have no place within a classroom–the corollary to this being that Pine wouldn’t be able to both parent and teach, therefore shortchanging her students. Some aspect of her story seems to have offended almost everyone, becoming a case study in how the juncture of work, class, mothering and breastfeeding is still a tinderbox of conflicted issues.

Feminist reaction to the story vacillated wildly, with some camps embracing Pine’s act of public breastfeeding as a needed desexualization of a natural act. Others pointed to the constant pressure mothers feel to breastfeed while lacking institutional support for the practice.

Yet there were Pine’s pesky comments about how she felt distanced from “lactivism,” and that her sole motivation for breastfeeding is simple convenience.  “It could be argued that my ability to breastfeed in public has been won on the breasts of so many women who have fought for that right,” she said, and yet she abhors the idea of becoming known for feeding her child in class rather than her other identities, notably researcher and scholar.

This point seemed to stir the most angst. Was revealing herself as more than an academic authority, and shifting her identity to that of a mother with a hungry child, detrimental to her status as a professional?  Pine’s refusal to be essentialized through her body inflamed feminist tensions for those who wanted to celebrate her act yet felt disappointed by her need to distance herself from its implications.

I admire Pine’s commitment to not canceling class. Yet, I think she was naïve in not realizing how her actions would affect students. While I absolutely think breastfeeding should be permissible in all environments, Pine seemed to forget that within American culture there is still a gulf between this act being seen as mundane and somewhat illicit. Even if she had bottle-fed the baby, there would be students who would have been disturbed by the imposition of her child in class.

This past spring, when my son was six months old, I received an invitation to guest lecture for a gender studies class at UCLA.  It was a good opportunity but there was no payment, so I expressed my concern about childcare costs. The professor told me that her teaching assistant would be willing to entertain my child while I lectured–but I knew there was no way I could teach effectively with my infant in the classroom or while listening for his cries down the hall.  I resolved the situation only by finding someone to babysit at my house.

Those who argued that Pine’s act reframes the classroom and breaks a paradigm rooted in male tradition have a point, but I think this mindset also denies how disruptive children are and the quiet necessary for both students and teachers to listen and to think.

The debate has been productive, though; the issues aren’t just particular to Pine but universal within American culture.  Her need to earn a living within a non-hostile work environment, perform capably at her job, retain her professional demeanor and be a mother struggling with a suddenly sick child are challenges that apply to a majority of working parents.  The passionate, divisive interchanges evoked by her story reveal how much change is needed for us to combine separate spheres into the context of our whole lives.

What would YOU have done in her position?

Photo from Flickr user paparutzi under license from Creative Commons 2.0