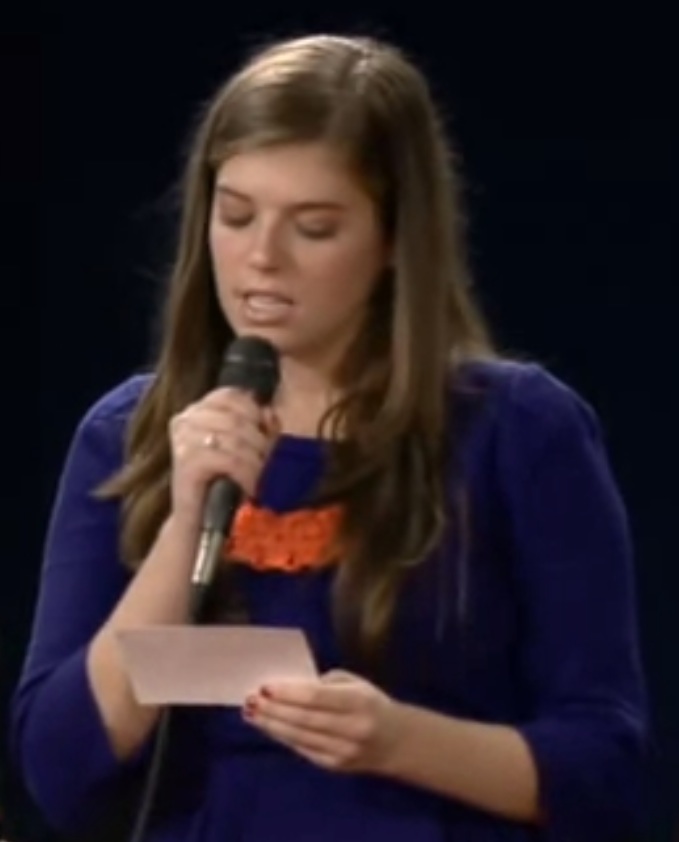 In what new ways do you intend to rectify the inequalities in the workplace, specifically regarding females making only 72 [it’s actually 77] percent of what their male counterparts earn?

Fenton’s question got both candidates talking about measures they have taken to work toward equal pay for women, with Pres. Obama bringing up the Lilly Ledbetter Fair Pay Act he signed into law in 2009 and Gov. Romney discussing the measures he took to involve more women in his cabinet as governor of Massachusetts (which instigated the evening’s most viralized meme).

Though the question centered on pay equity, it served as a catalyst for a broader acknowledgement of women’s issues. Romney further elaborated on ways to improve women’s standing in the workforce; Obama linked women’s economic inequality with contraception and women’s health care, arguing that they are not just women’s issues but issues that affect whole families.

We find out today that Fenton doesn’t call herself a feminist, but is “very protective of my reproductive rights” and supports Obamacare because it’s allowed her to stay on her parents’ health insurance. Nonetheless, even though she needs some schooling in feminist history, her question was certainly a feminist act and stimulated much-needed discussion in the presidential race.

Fenton wasn’t the only woman who made her voice heard last night. After promising to be more than a debate spectator, moderator Candy Crowley did just that by asking follow-ups to audience members’ questions and pressing for specifics from both candidates. Though she spent a substantial amount of time struggling to reign in both candidates, who frequently ignored time limits (why isn’t there just a microphone cut-off mechanism?), Crowley proved herself an effective and assertive member of last night’s debate. Candy Crowley, we heart you, too.

Screen shot of Katherine Fenton from YouTube via PBSNewsHour.