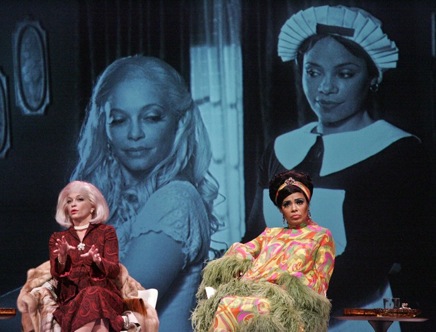 Looking for an evening of entertainment that’s humorous, thought provoking and possibly paradigm changing? The West Coast premiere of African American Pulitzer Prize-winner Lynn Nottage‘s new play By the Way, Meet Vera Stark is your ticket. But it’s not your typical evening of theater.

Directed by Jo Bonney and featuring Sanaa Lathan (The Cleveland Show, Boss), this Los Angeles production chronicles, satirizes and interrogates representations of race and sex in film and TV in 1933, 1973 and 2003. Using a multi-media approach, it starts a conversation that resonates well outside the theater’s walls.

The plot centers on Vera Stark, a fictional composite of such real Hollywood actors as Theresa Harris, Hattie McDaniel and Ethel Waters: women of incomparable talent relegated to playing maids and slaves. Vera is joined by her roommates–Lottie, an accomplished Shakespearean now going in for mammy roles, and visibly mixed-race Anna Mae–in her desire to secure speaking roles in a new Southern epic. Vera also works as a  maid for Gloria, an actor known as “America’s Sweetie Pie,” and the two have been close for years. Working together to fool the white producer and director into believing that they are actually a perky blonde virgin (Gloria), an illiterate woman so burdened by her heritage that she’s just got to sing the blues (Vera), a Brazilian from Rio de Janeiro (Anna Mae) and a mammy (Lottie), these ambitious women serve up a lot of drinks and a lot of laughs.

Act II opens with a clip of The Belle of New Orleans, the Southern epic in which the ladies were so eager to get parts. They did, and, we learn as the play takes us forward in time that the movie, and Vera’s character specifically, have become iconic. In 1973, Vera and Gloria appear on a talk show together, and in 2003 a panel of black academics discusses Vera’s legacy. The 1973 Vera Stark has become an alcoholic and is starring in a show in Vegas. Gloria, who left Hollywood to live in London, is in town receiving an award. Though it almost comes out, the world never learns the true nature of the relationship between Vera and Gloria; the academics can only speculate as to whether they were costars and friends, mistress and maid, lesbian lovers or cousins. The audience of the play does learn the truth (SPOILER ALERT): Gloria is in fact Vera’s cousin and an octoroon.

Both acts travel at the pace of a Noël Coward play, and both investigate period-specific cultural paradigms. In Act II we meet a Dick Cavett-esque talk show host, a 70s rocker a la Mick Jagger, a black revolutionary poet with an African name, a Cornel West-like writer and film maker and a black woman academic with a hyphenated name who keeps getting interrupted. Savvy audience members may also recognize references to Uncle Tom’s Cabin, Camille and The Dutchman.

Nottage, a graduate of Brown and Yale and the recipient of both a Guggenheim Fellowship and a MacArthur Grant, is known for writing history-rich plays. For her 2009 Pultizer-winning play Ruined she traveled to Africa to interview refugees and witness local traditional performances. For her break-out hit Intimate Apparel, she delved into the living and working conditions of urban African Americans in the early 20th century. Nottage told the Ms. Blog that, for By the Way, Meet Vera Stark,

I researched the entire period, so I read about Hattie MacDaniel and Ethel Waters and Theresa Harris and found the films with them and just watched and watched. It’s really interesting to see representations of women in the pre-code Hollywood films versus the films just after the code. They have sexuality, they are independent, they’re self-possessed. They really resemble women that we know today. And then those women disappear for 20, 25 years and it isn’t until the ’60s and ’70s that we see representations of those women again.

But this isn’t just a history play. Very real and relatable characters allow the audience to invest emotionally and to enjoy watching how the characters deal with the boxes into which they’ve been put. And the comedy of the play, along with the powerhouse performances of the women in it, makes the production much more than an intellectual exercise. Director Jo Bonney shares,

We had always talked about it as having the quality of the screwball comedy of the ‘30s, and the thing was to just go there, to be unabashed, and believe that if, in fact, we got too serious, it would feel like we were trying to hit people over the head with it. It’s satire, and satire has always been the cleverest way to point out social and political issues.

This satire definitely does it’s political job: The show is a genuine conversation starter about the extent to which stereotypes still guide casting in film and television. Bonney talks about the difference between doing it in New York and in Los Angeles:

Here I really hear people talking about it afterwards. And you can hear audible responses to references and moments that are really about the industry. At the opening a [couple of film directors] were talking about how potent it was to see it here. Once you’ve seen it, it exists within you, it’s become part of your experience. And I just don’t think you could ever really look at a script again or telling a story with that not in your consciousness.

To make sure people keep it in their consciousness, Nottage has created a virtual Vera Stark as well: Two of the fictional academics in the play have their own websites about her (Rediscovering Vera Stark and Finding Vera Stark). Nottage has even made a faux video documentary (below) about her imagined The Belle of New Orleans. She told Ms.,

The journey of the website is that you move from investigating [Vera’s] life, that’s very like the lives of a lot of those women, to these images of Ethyl Waters and Theresa Harris and Hattie MacDaniel and then to vaudeville. And so I’m inviting [the audience] to go a little deeper into an investigation of what it was like to be an African American performer at that time. It’s designed to lure people into probing deeply into these people’s lives.

By the Way, Meet Vera Stark runs through October 28 at The Geffen Playhouse in Los Angeles.

Photo of Amanda Detmer and Sanaa Lathan by Michael Lamont