Another Defeat for DOMA - Ms. Magazine
Skip to content 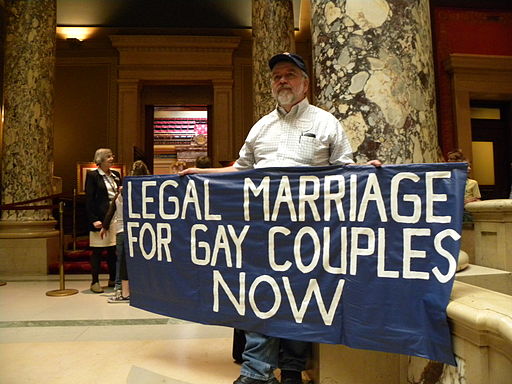 The Defense of Marriage Act just can’t get a break in federal court. And that’s great news for human rights.

The 2nd U.S. Circuit Court of Appeals in New York struck down the 1996 law as unconstitutional today, just as a federal appeals court in Boston did earlier this year. Surprisingly, the only dissenter on the three-judge panel was Chester Straub, who was appointed by President Bill Clinton. The case is now expected to go before the U.S. Supreme Court next year.

Judge Dennis Jacobs–a conservative–wrote in his majority opinion that the U.S. must have an “exceedingly persuasive” reason to discriminate against gay people. And, as Think Progress points out, “This is the same very skeptical standard afforded to laws that discriminate against women.” Judge Jacobs is not persuaded that the government has a burning need to regulate marriage between same-sex couples, and in doing so DOMA violates the equal protection clause of the Constitution.

The case before the court involved Edie Windsor, now 83, who sued in 2010 over the $363,053 in federal estate taxes she was asked to pay after her partner of 44 years, Thea Spyer, died the year before. The couple, who had married in Canada in 2007 but weren’t considered married in the U.S. because of DOMA, were the subjects of the wonderful 2009 documentary film Edie and Thea: A Very Long Engagement.

Here’s how the judgement of the court concluded:

Our straightforward legal analysis sidesteps the fair point that same-sex marriage is unknown to history and tradition. But law (federal or state) is not concerned with holy matrimony. Government deals with marriage as a civil status–however fundamental–and New York has elected to extend that status to same-sex couples. A state may enforce and dissolve a couple’s marriage, but it cannot sanctify or bless it. For that, the pair must go next door.