Could a Quota Boost Women into Europe’s Boardrooms? - Ms. Magazine
Skip to content 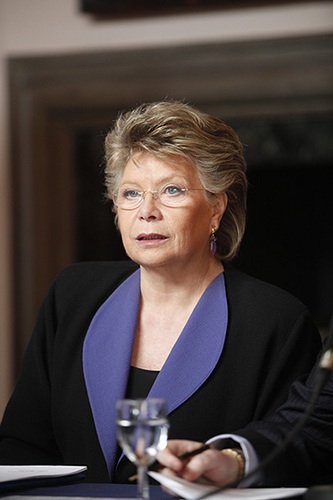 Viviane Reding has been the vice president of the European Commission for nearly three years, making her one of the most politically powerful women in Europe. In her three terms, she’s been extremely effective in challenging everything from exorbitant roaming charges from cell phone companies to France’s treatment of the Roma. But now, she’s gearing up for what may be her most Goliathan fight ever.

In a bold move that has businessmen across Europe sweating, Reding wants to institute quotas for women on the supervisory boards of all of Europe’s companies. She has been pushing for more women in the upper echelons of the corporate world for most of her political career and has decided to force business’s hand. Women comprise only 13.7 percent of the board seats in the publicly listed companies of the European Union, even though women have been rapidly outpacing men in admissions at European universities.

“I tried first with persuasion,” Reding said last week. “Voluntary measures have not achieved any progress, and if we continue at that pace we will need 40 or 50 years [to achieve equity].”

The proposed measure already has many detractors, some of whom say that quotas undermine efforts to advance the most qualified people and others who insist that bottom-up solutions are better for women. Her more cynical political critics even say that this is just a shallow attempt to use women’s issues to get attention. European Union leaders from nine countries have come out against her proposal, with Britain leading the pack.

Despite this, Reding is barreling forward with her plan, which calls for 40 percent of non-executive director positions to be held by women by 2020.

“It’s going to be a fight–it’s been a fight already–but a battle worth fighting,” she said.

According to polls by the European Commission, three-quarters of the European public support the quotas as long as merit is considered regardless of sex. Reding agreed that the quota would apply only if there were readily available, qualified women. But she doesn’t doubt that there are plenty:

We cannot waste this talent, and women are good for business. Quotas are never a goal, quotas are an instrument–the hammer you need to break the glass ceiling.

Photo via LSE in Pictures licensed under Creative Commons 2.0.