Blackmail, Courage and the Truth - Ms. Magazine
Skip to content 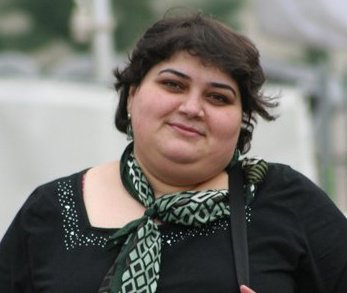 “My career in journalism was accidental,” said Azerbaijani investigative journalist Khadija Ismayilova when asked how she got her start. “I was 21. I was a translator for the newspaper, and one day, they didn’t have a reporter to go out, so they asked me to go. Then, it just happened to me.”

The next 14 years would be full of exposing festering corruption, receiving threats from the government, being blackmailed with a sex tape and even being declared an enemy of the state by Azerbaijan’s president. She stoically faces all of these things in order to fight for transparency in government, but also in the hope that one day what she does won’t be seen as remarkable but as the norm. Tonight, Ismayilova will be honored in Los Angeles with a Courage in Journalism Award from the International Women’s Media Foundation for her indefatigable efforts in afflicting the comfortable of her government’s elite. In her brief trip to L.A., she was able to sit down with Ms. and talk about the meaning of bravery in journalism.

What does courage mean in journalism, and why is it worth the risk ?

When you do these things you aren’t thinking about being courageous, you just start doing the reporting. When I do my investigations, I don’t think that I’m doing something extraordinary. I just do it because I’m curious, and when I find facts I share it because it’s the people’s right to know. I don’t see it as my achievement that I’m being considered courageous; it is the government that is making a big deal of what I’m doing. The government is hiding their mismanagement and wrongdoings, and that is what makes us have to do these things that people see as courageous. So the credit goes to them rather than to me.

It’s sad that what I do requires so much effort and is so risky. Politicians make our jobs risky. Organized crime makes our jobs risky. In Azerbaijan, these two things are the same. It is power that is criminalized. Political influence is consolidated with organized crime. So our politicians are organized crime figures as well. They hide money, they launder stolen money from the budget, and then they appear in different countries of Europe and the U.S. with their dirty money and they invest it there. I’m not just trying to inform Azerbaijani voters but also the world, since people in other countries should know if bad money is being invested in their country. The problems of Azerbaijan are already becoming an international problem, it’s no longer just our problem. When power and corruption come together within the country, there is the huge problem of drug transit. Many drugs pass Azerbaijan on their way to Europe and other Western controls. This becomes possible because of the corrupt system in place. It’s no longer just my responsibility or my fellow citizens’ responsibility. This situation is global, and the world is too small now. It’s important for the rest of the world to stop these kinds of regimes.

What have you done to expose government malfeasance in Azerbaijan, and how has the government retaliated against you?

I report about the big corruption. I discovered the president’s family’s offshore businesses. They have companies in Panama and other places, and they’ve been hiding their involvement in Azerbaijani state contracts. They have control over banking systems in Azerbaijan. They control construction, energy infrastructure, airlines, gold mining and communications. They are trying to hide this information. I uncovered this, and it brought troubles to me. The government planted a video camera in my bedroom, and they filmed me when I was with my boyfriend. In Azerbaijan you are not supposed to have a boyfriend, and you are not supposed to have sex if you are not married. Honor killings are still a huge problem in Azerbaijan. I feel that was a calculation in taping me in my bedroom. They did it in the hopes that someone in my family would arrange to kill me after seeing it. So they blackmailed me by sending me pictures from the footage and told me to behave or I would be defamed. And, well, I didn’t behave. I made it public on my own and said I was being blackmailed. I said I was not ashamed of what I did, and that I will continue my investigations into government corruption regardless of what they do. That happened in March of this year, and since then I have published three investigations about the president and his family. Society did support me in what I wrote. From conservatives to liberals, I had full support from everyone.

In a field like investigative journalism where the reporting you produce may not always achieve the social change you want, how do you measure progress?

The impact of what we do is not immediately seen. In other countries in the West, journalists will report and collect facts, then law enforcement launches their own investigation and then brings wrongdoers to justice. That does not happen in my country. Because of this, many people think what I write is in vain, since I inform and nothing happens afterwards. Well, that is not true because, for example, I was involved in an international investigation that’s been tracking Hosni Mubarak’s finances. It turned out that when the political change happened in Egypt, my investigations helped to follow the money and find the hidden scam of money laundering. And part of this investigation led them to Azerbaijan, because some Azerbaijanis were involved in the laundering as well. It was an international organized crime group that was involved in laundering that money. Thanks in part to the facts I provided, international law enforcement was able to do their job.

This award brings some recognition to what I’m doing, and it inspires other journalists, younger journalists to do the job. They understand it’s just not all troubles, it’s recognition. Whenever I uncover some corruption scheme, I feel like a winner. The state tries to build the myth that the president doesn’t know about the corruption and that it is only the mid-level officials who are doing it. But I help to destroy those myths, and that is a triumph for me. I think that’s why they hate me. According to Wiki Leaks, the president has named me an enemy of the state, and was personally asking American diplomats–because I work for American radio–to fire me. So he takes what I do very personally. That’s why he went as far as to put cameras in my bedroom and bathroom. You can’t be corrupt and a good guy. If I can bring some more justice by at least destroying the myth then I feel accomplished.

What special challenges have you faced being a woman in journalism?

I’m not very much into gender issues, but I come from a very conservative society. When I became a journalist, my father was approached by my other relatives and asked why he would let me work for a newspaper. They had a very bad opinion about women working in media. Their opinions are not based on any facts but just stereotypes. I can’t say that there is a huge discrimination against women; I can’t say that is the case in my country. But still, on my talk show, I feel people are troubled to get criticism from a woman. It is not a big problem, it is more of them saying, “Oh if you weren’t a woman, I would tell you this and that.” Sometimes they will also mention the sexual video of my boyfriend and I to shame me on the air. They created a website for it and posted it there. I just make it clear that I am not ashamed.

What is the most pressing issue facing women in Azerbaijan right now?

Azerbaijan is a transit hub for human traffickers, and I did several stories on it long ago. It is still a big problem. My students have now reported on the growing problem. It is no longer just a transit hub but a destination for women slaves. Police are actively protecting these operations. These traffickers get documents and passports they need to take women in and out of the country with ease. The system of bribery that is in my place in my country helps these traffickers to flourish and evade punishment.

Do you feel rare?

The Ms. blog will be running a series of profiles on the Courage in Journalism awardees.