What Happened to Me Could Happen to You: Equal Pay and the Election - Ms. Magazine
Skip to content 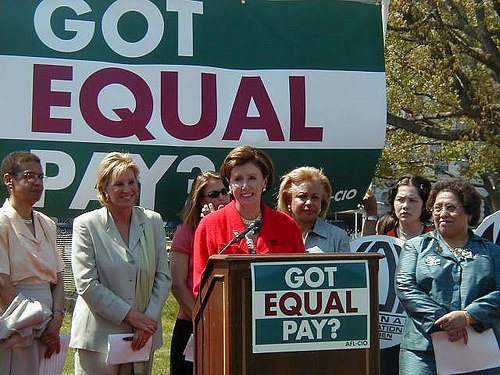 The Equal Employment Opportunity Commission (EEOC), formed in 1965, is the last bastion of defense for countless women who face pay discrimination. Unfortunately, this avenue of protection could be disappearing, and along with it actual consequences for employers who violate the law. Tomorrow, when women cast their votes, we must think of how the government can make enforcement of equal pay a priority.

I know all too well what happens when the government doesn’t.

I was a professional in the creative industry in early 2001 when I was unintentionally handed a stack of files not meant for my eyes. It was in these files I discovered my salary was substantially less than male coworkers with equal experience and fewer job responsibilities. The salary differences ranged from 14 to 21 percent. I issued a complaint with human resources regarding the pay disparity, but shortly afterwards was asked to clean out my office. I was demoted and humiliated. Eventually I was fired.

This was not the first time this had happened to a woman at my company.

My employer offered me a generous severance, tendered in exchange for my silence. Suddenly sans income, I was tempted to sign away my rights in return for a pile of cash and then quietly disappear. Other women before me had done just that. But I was haunted by the idea that if just one of those women had put up a fight, perhaps I wouldn’t have found myself in this situation.

I’d also built a solid case against my employer. In addition to the salary records, I had something rarely seen in discrimination claims: a documented admission of guilt by my former superior. That I was able to get this fortuitous and damning evidence still amazes me. I suppose my former boss was confident that I’d take the money and run. He’d always underestimated me.

I rejected my employer’s severance offer and filed a complaint with the EEOC. Tasked with enforcing federal employment discrimination laws, the EEOC is, in many cases, a woman’s only recourse for fighting income inequality and is therefore a vital tool in our mission to close the gender wage gap.

EEOC investigators sat down with me in early 2002, heard my evidence and called it a “smoking gun”–exactly what they needed in order to put an end to the systemic gender discrimination that had been taking place at my former company for years.

As for my claim, I waited patiently for the EEOC to use the “smoking gun” not only to bring my former employer to justice for what it did to me, but also to guarantee fair pay for all the women still working there and those yet to be hired. However, the EEOC was becoming overwhelmed.

A year and a half passed. Calls went unreturned, updates were deferred, audits were rushed, reports were deficient. As it turned out, my once very promising case was added to a rapidly mounting heap. After months of waiting, I finally took matters into my own hands and sued. The EEOC was never able to complete an adequate investigation of my case.

When the Obama administration took office in 2009, a turnaround was initiated, and by 2011 the EEOC was able to reduce its backlog by 10 percent–the first reduction in 10 years. But while progress has been made, it has been slow, and there is still a long way to go as the agency struggles to regain lost ground, squeezed by the nation’s economic crisis and unsupported by those politicians who fail to see its value.

Regardless of what happens tomorrow, it is crucial we understand where our politicians stand on the EEOC and make sure support for income equality is not only voiced but enforced. It’s not enough to simply support the hiring of women but equitable pay for their work.

Bolstering the EEOC is essential to our quest for equal pay, as is enacting laws such as the long-awaited Paycheck Fairness Act that would, among other things, protect employees who question wage policy from retaliation and judge wage discrimination on the comparable worth of jobs. If the EEOC is put on the chopping block again, it will cost us dearly–and for too many of us that cost is already quantifiable.

Photo of Nancy Pelosi stumping for the Paycheck Fairness Act back in 2002 from Flickr user Leader Nancy Pelosi under license from Creative Commons 2.0