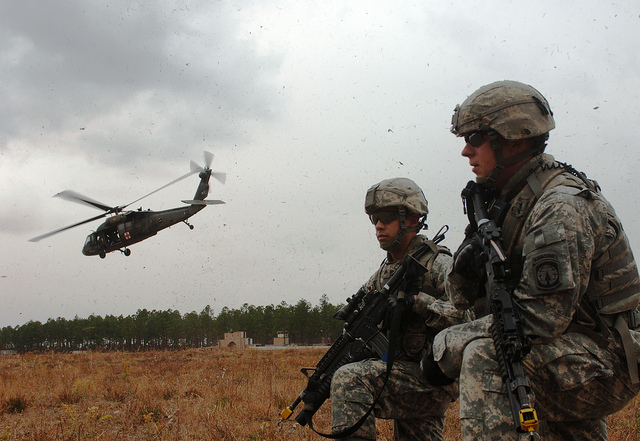 The Air Force released last Wednesday its report on recent incidents of sexual abuse at the Lackland Air Force Base in San Antonio, Texas, where members of the Air Force undergo basic military training. According to the report, 25 military training instructors (MTIs) have been or are currently under investigation. So far, the scandal has resulted in criminal charges against 11 MTIs, with five convictions: One, Air Force Sergeant Luis Walker, was found guilty of 28 rape and sexual assault charges, and others were convicted of inappropriate relationships with recruits. As of Wednesday, the number of possible victims who may have been sexually abused by Air Force officials had risen to 49.

Considering that the victims involved were there to learn from the MTIs who abused their trust, this case is particularly disturbing. Says Chief of Air Force Safety Major General Margaret H. Woodward, who conducted the investigation:

This report necessarily focuses on the few who violated a sacred trust and broke faith with fellow airmen everywhere.

This scandal is only the most recent in a long history of sexual abuse in the military. The U.S. Department of Labor finds that one in three military women has been sexually assaulted, compared with one in six civilian women. Air Force Gen. Edward A. Rice, Jr. claims that incidents of sexual assault stem from the military’s basic training environment, which he describes as “highly susceptible to the abuse of power.”

Rep. Niki Tsongas (D-Mass.), who sits on the House Armed Services Committee, noted that the results of the Lackland investigation were unsurprising “given the defects in the system and in leadership that have become clear since the Lackland incident came to light.” She further concluded that “the horrific incidents at Lackland and the string of high-profile scandals of a sexual nature currently plaguing the military confirm a deep-rooted cultural failure.”

Because previous incidents of military sexual assault have rarely yielded real consequences for abusers, many are concerned that those being held responsible this time around will face little accountability. For example, when Tia Christopher was raped by a fellow recruit shortly after joining a Navy training program in 2000, she was scared to tell anyone because she wanted to continue participating in her program. When she eventually came forward, after learning her rapist was assaulting other women, she received very little support: Christopher was eventually processed out of her program on a honorable discharge due to a “personality disorder,” and her rapist remained in the program for another four years.

“I ended up getting out and my perpetrator stayed in,” she recalls. It wasn’t until 2004, four years after Christopher’s rape, that Defense Secretary Donald Rumsfeld ordered a review of how sexual assault cases were handled in the military. In response, the Pentagon established the Sexual Assault Prevention and Response office (SAPRO) in 2005, which aims to create an assault-free military culture and assist victims of sexual abuse.

In light of recent events, SAPRO, though well-intentioned, has clearly not achieved what it set out to accomplish. So, what can be done to stop the rampant sexual abuse occurring not just at Lackland, but in every military institution? To start, Gen. Woodward outlines more than 40 recommendations, based on interviews and surveys with approximately 18,000 service members. Among these suggestions is a requirement that women comprise at least 25 percent of all military training instructors, which would alter the current training environment in which men in positions of power sexually assault women whom they are supposed to be mentoring.

The Air Force has said it plans to implement the majority of Woodward’s recommendations. However, some fear that, as an institution with a history of failing to hold perpetrators accountable, the military will continue to let things slide. Anu Bhagwati, executive director of Service Women’s Action Network, notes that the while the changes Woodward suggests are positive,

They do not correct the flaws within the military judicial system. The military far too often retaliates against victims and fails to hold perpetrators accountable.

Saying that the entire military training system is in need of an overhaul is an understatement: The idea that an institution designed to protect and serve the United States does not adequately protect its own service members is horrifying. Hopefully, this latest development at Lackland will serve as a catalyst for long-awaited large-scale change.