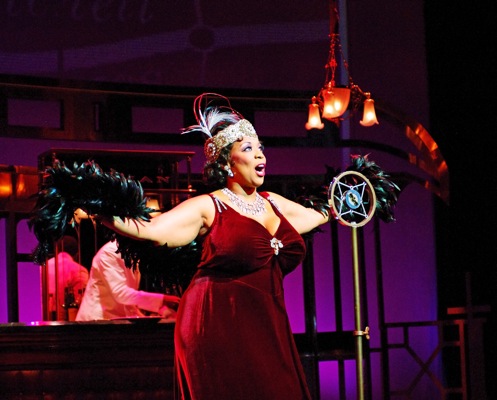 What do you get when you combine passionate individuals determined to survive with multi-generational family drama and two key moments in African American history? A pretty great new play, that’s what.

Opening November 23 at Arena Stage in Washington, DC, Pullman Porter Blues, by Cheryl L. West (Jar the Floor, Before it Hits Home), takes place aboard a Pullman train headed from Chicago to New Orleans on June 22, 1937, the night Joe Louis won the world heavyweight boxing championship. Three generations of Sykes men are on the train working as porters: The eldest, Monroe, proud of the life he built for his family by working in the first paid job available to freed slaves; Sylvester, a union organizer determined to better conditions for porters and become a conductor himself; and Cephas, a well-educated young man oblivious to the hardships his father and grandfather faced and naïve as to the obstacles in his path. The men are joined on this fateful night by a blast from their past: Juba, once a maid on the trains, now a blues-singing superstar.

Starting in the 1860s, jobs created by the Pullman Train Company contributed significantly to the rise of an African American middle class. Though the history of the Pullman porters is well documented, not much attention has been paid to Pullman maids. According to Christine Sumption, the researcher/dramaturg for the show:

At the time the Pullman company was getting started and offering this incredible service to wealthy, white passengers–this meticulous service all down the train line given to them by African American men–they also recognized that it was perhaps inappropriate to have black men putting white women to bed. So they brought in African American women to serve as maids on the train, and these women literally did everything for these white women. They would do their manicures, they would take care of them when they were sick, help them get showered, take care of the children, take care of the elderly. They basically did much of what the porters did, and on a much more personal level.

Without their work in the women’s auxiliaries, the first union led by African Americans–The Brotherhood of Sleeping Car Porters–might never have been. Due to tough economic times and changing fashions–so women passengers needed less help dressing–by 1937 the company no longer employed maids.

Juba’s experience as a maid on a Pullman train did not end well: After being raped by a white conductor while her lover, Sylvester, stood by unable to help, she fled the trains and made a new life for herself. Now a successful entertainer, she is rich enough to rent her own sleeping car for a trip with her band. Unbeknownst to her, Sylvester and his father Monroe, who nursed Juba back to health after her attack, are on the train, bringing about a kind of reckoning for them all.

Based on such women as Bessie Smith (who famously owned her own sleeping car), Ma Rainey, Sippie Wallace, Ida Cox, Victoria Spivey and Lucille Bogan, Sumption notes that Juba is one of

these queens of the blues who, in defiance of the time and expectations of who they were supposed to be, were out there–aggressive, independent, assertive–making their own way and claiming their sexuality and their right to be not just singers but managers of bands and managers of their own lives, with power and actual wealth.

In fact Juba’s past is more of an issue for Sylvester than it is for her. His inability to protect her in her moment of need has driven him to fight to improve working conditions, pay and promotional opportunities for porters in the union. (His long battle will end in success two months after the date that the play concludes, when the Pullman Company finally recognized the union and signed a collective bargaining agreement.)

Asked about the danger of the character of Juba serving more as a dramaturgical tool for Sylvester’s redemption than as a character in her own right, director Lisa Peterson tells the Ms. Blog,

Now it’s true that Juba had this terrible thing happen to her in the past in which she felt powerless, but in response to having had that happen she’s developed this really aggressive mask, [a] way of moving through the world. So [she’s] fighting…Sylvester’s problem, his inability to help Juba, that’s his problem. That’s a guilt that he carries.

When a man is not able to protect his woman, a common occurrence for black men during slavery and post slavery, it is that type of failure that would indeed haunt him every time he closed his eyes  for the rest of his life. He’s trying to get that redemption by telling her, ‘That’s why I’m fighting so hard,’ and she, of course, has no need to hear that… He wants to explain and he wants her to acknowledge what he’s been doing differently. That’s his need. It’s not her need.

E. Faye Butler, who plays Juba and with whom the Ms. Blog also spoke last September when she appeared in the Arena Stage’s Trouble in Mind, talks about playing a character who has been but is no longer a victim:

She’s always in control. She will never be out of control another day in her life. She lives in the moment. He’s still living in the past. She’s living in the present.

Though in many ways Juba’s experience of sexual violence represents that of so many women throughout history, regardless of color, Butler finds nuances that are specific to the experiences of African American women:

I think a lot of African American women are left hanging in the balance trying to figure out what happened. And we get so tired of figuring out what happened we just say, ‘Forget it,’ and we push it to the side. A lot of men leave, and they leave with their tails between their legs because they don’t think they’re good enough, they don’t have enough money, they don’t have enough education. And African American women have always had to forge ahead. We can’t wait. We have children and we have responsibilities. We have to take care of ourselves.

West hopes her intimate exploration of individual lives, family history and the history of the African American people will lead the audience to ask difficult but important questions about the effects of history on our present:

Where are we now? How empowered are we now? Where are our tools for survival? How do we express and tell the next generation our history so that they can take from that a sense of pride, a sense of purpose and even a sense of direction, as opposed to ignoring the history because we think it’s only of victimhood? …We don’t want to think about the times we had to do menial labor when we’re now lawyers and doctors and priests and everything, the whole gamut. But it is off the backs of people who didn’t have the same privileges that we became what we are today. A lot of pride, a lot of dignity, a lot of lessons can be learned from those porters, because no matter what, they consistently said, ‘I do a job and I do it well.’

If you are near D.C., get tickets now to invest in this world and listen to some fantastic blues.

Photo of E. Faye Butler as Juba from by Kevin Rosinbum.