Love in the Land of Filipino People Power - Ms. Magazine
Skip to content 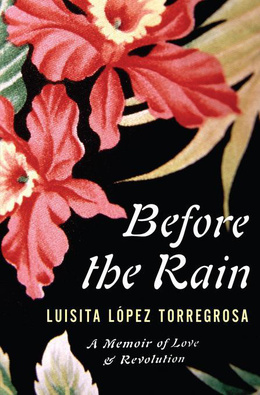 Before the Rain is a romantic memoir set against the backdrop of the People Power Revolution in the Philippines. Author Luisita Lopez Torregrosa is a career-driven newspaper editor in New York who falls in love with a married colleague, Elizabeth. At first, Torregrosa befriends Elizabeth, but the friendship quickly blossoms into a romance. Shortly thereafter, the newspaper selects Elizabeth to be a foreign correspondent, and when Elizabeth moves to Manila to cover the People Power Revolution in 1986, Torregrosa requests a leave of absence from her job and follows her.  The pair arrives in Manila during a very tumultuous time, both politically and personally: The country is in the midst of overthrowing a dictator and Elizabeth is struggling with her sexuality and the end of her marriage.

Torregrosa’s beautiful, emotionally driven prose paints a vivid picture of her relationship with Elizabeth, which spanned nearly a decade and took them from New York to the Philippines to Japan and back to New York. Although the story is about a same-sex relationship, the word “lesbian” does not appear in the book. Rather than focusing on issues unique to same-sex couples, the author explores the universal aspects of relationships: giddy first dates, the blissful comfort of commitment and the dread and dull ache of a relationship gone sour.

Torregrosa also exquisitely captures the diverse sights and sounds of Manila in the 1980s, from her days lounging by the pool of the posh Manila Hotel sipping mango juice to her nights listening to cannons explode and watching geckos climb her bedroom wall.

The shortcoming of this book is its lack of historical detail. Although subtitled “A Memoir of Love and Revolution,” the revolution plays, at best, a minor role. I had hoped to learn more about People Power, a nonviolent movement that restored democracy to the Philippines after more than 20 years of authoritarian rule and led to the election of the first female president in Asia.  The revolution began in 1983, shortly after my family left the Philippines, and when it ended in 1986 I was in kindergarten. I only learned of it through televised images of Cory Aquino in a yellow dress surrounded by jubilant crowds, and of Ferdinand Marcos boarding a plane to Hawaii. Unfortunately, the book did not expand my cursory knowledge; I was, once again, left with fleeting glimpses of a key moment in Filipino history.

All in all, the author’s smooth style and engaging narrative yielded a page-turner, though  the opportunity was missed to more fully interweave the themes of love, loss and upheaval common to both revolution and romance.

Maria Angela Johnson is a litigator in private practice with a passion for human rights law. She has worked with AsylumAccess, the Midwest Immigrant and Human Rights Center’s Anti-Trafficking Project and Northwestern Law School’s Juvenile Asylum and Refugee Clinic. Angela currently volunteers with Kids in Need of Defense, helping unaccompanied minors obtain legal status. Angela writes for the Fahamu Refugee Legal Aid Newsletter and has been published in the Seattle Journal for Social Justice and Women Lawyer’s Journal. She was also featured in The Rumpus’s Funny Women column in October 2012. In her spare time, Angela enjoys yoga, running, camping, travel, playing ukulele, baking pies, drawing, hanging out with her husband and walking her dog.